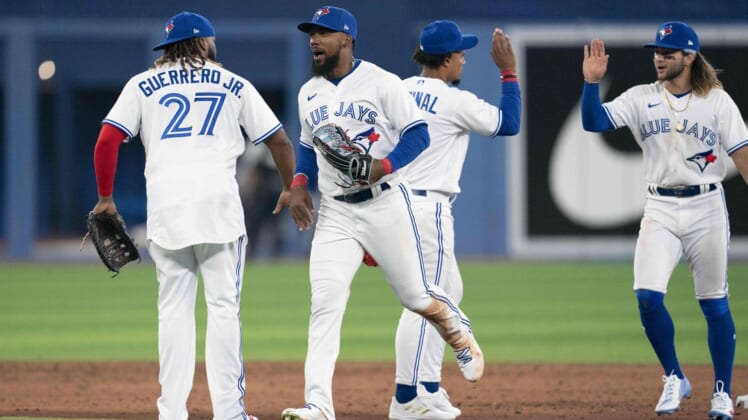 Teoscar Hernandez hit a three-run homer for the Blue Jays and Danny Jansen had a solo shot on opening night in Toronto.

Josh Donaldson singled to lead off the 11th inning, lifting New York to a victory over Boston in the season opener for both teams at Yankee Stadium.

Donaldson won it when he slapped a 1-1 pitch from Kutter Crawford (0-1) into shallow center to score Isiah Kiner-Falefa, the designated runner at second.

DJ LeMahieu forged a 4-4 tie in the eighth inning when he lifted a 1-2, 96 mph fastball into the right-center field seats off Garrett Whitlock, who struck out four of the eight hitters he faced before allowing the second baseman’s homer.

Houston erupted for eight runs in the seventh inning to break open a close game and beat host Los Angeles in Anaheim, Calif.

The Astros had 14 hits in all, including six home runs. Jose Altuve, Aledmys Diaz, Alex Bregman and Jeremy Pena each hit a solo home run. Kyle Tucker hit a three-run homer and then added a solo blast for Houston, which got contributions from the entire lineup.

The Angels scored a couple runs in the first inning against Astros starter Jake Odorizzi but didn’t score again until the game was out of reach. Jared Walsh had three hits for Los Angeles, but Mike Trout was 0-for-3 with two strikeouts.

Scherzer (1-0) allowed three runs on three hits, striking out six and walking one. After his first start was pushed back due to a hamstring issue, the 37-year-old right-hander threw 80 pitches and retired eight of the last nine hitters he faced. Jeff McNeil had a solo home run and two singles, and Starling Marte drove in three runs with a pair of hits for New York.

Sean Manaea pitched seven no-hit innings in his debut and Jurickson Profar belted a two-run homer to lead San Diego to a shutout victory over host Arizona in Phoenix.

Eric Hosmer went 3-for-4 and scored twice, and left-hander Taylor Rogers pitched a perfect ninth inning in his team debut as San Diego bounced back from Thursday’s disastrous season-opening loss.

Daulton Varsho was the only Arizona batter to reach base against Manaea (1-0), drawing a two-out walk in the second inning. Manaea retired the next 16 batters before being informed his night was over.

Newcomer Kyle Schwarber homered on the seventh pitch of the bottom of the first inning and Brad Hand pitched out of a jam in the seventh inning as Philadelphia earned an Opening Day victory over visiting Oakland.

In the first of a three-game series between teams that used to share Philadelphia as a home, the Phillies also got two hits from rookie hotshot Bryson Stott and a seven-strikeout performance from Aaron Nola (1-0) over six-plus innings.

Batting fifth in a lineup that no longer includes Mark Canha, Matt Chapman and Matt Olson, Seth Brown belted a three-run homer in a four-run seventh for the A’s, who nearly erased all of a 6-1 deficit and had two runners in scoring position before Hand struck out Jed Lowrie to preserve a one-run lead.

Javy Baez hit a game-winning single to cap a two-run, ninth-inning rally and Detroit edged visiting Chicago in the opener for both teams.

Eric Haase homered off Liam Hendriks with one out to tie the game. After Austin Meadows hit a two-out triple, Baez hit a blast toward the right-field wall. White Sox outfielder A.J. Pollock made the catch after bobbling the ball but replay review showed the ball hit off the wall first before reaching Pollock’s glove, making it a base hit by rule.

Baez was making his Tigers debut after signing a six-year contract as a free agent. Miguel Cabrera had a two-run single, while Meadows and Robbie Grossman scored two runs apiece for Detroit. Gregory Soto gave up a home run to Andrew Vaughn in the top of the ninth but was credited with the win.

The Braves raced out to a 7-0 lead after three innings. Morton (1-0) was perfect over the first four innings and allowed two hits and two runs over 5 1/3 innings, walking one and striking out five.

Newly acquired closer Kenley Jansen was very shaky in his Braves debut in the ninth, barely closing out Atlanta’s first win of 2022. In the non-save situation, Jansen allowed three hits, three runs, and walked a batter before Jonathan India flew out to center to end the game.

Tied 1-all in the home half of the eighth, Wander Franco reached base with his third hit, a single off Dillon Tate. Pinch hitter Ji-Man Choi walked, and Randy Arozarena beat out a chopper to load the bases. After a fielder’s choice at home retired Franco, Mejia came off the bench to drive in Choi with the game-winning run on a lineout to center off Jorge Lopez (0-1).

Slater’s hit off reliever Anthony Bass drove in Darin Ruf, who was on first base after a walk. Joey Bart, Brandon Belt and Thairo Estrada homered for the Giants, and right-hander Logan Webb held the Marlins scoreless into the seventh inning.

Miami’s Jazz Chisholm Jr. hit a two-run, go-ahead homer in the top of the ninth inning, giving Miami a 5-4 lead. He hit his blast off Giants closer Camilo Doval, who allowed three runs in the ninth. But Estrada homered off Marlins right-hander Anthony Bender to lead off the bottom of the ninth, sending the game to extra innings.

Robbie Ray pitched seven strong innings in his Seattle debut in a win over host Minnesota in the season opener for both teams.

Mitch Haniger hit a two-run home run for the Mariners after the scheduled opener in Minneapolis was delayed a day because of inclement weather in the Twin Cities. Gio Urshela hit a solo shot in his debut for the Twins.

Ray, a left-hander who won the American League’s Cy Young Award last season with Toronto before signing as a free agent with the Mariners in the offseason, allowed one run on three hits, with four walks and five strikeouts. He threw 96 pitches.

Chris Taylor had two hits and Gavin Lux drove in two runs out of the No. 9 spot in the lineup as Los Angeles beat Colorado at Denver in the season opener for both teams.

Walker Buehler (1-0) allowed two runs on four hits in five innings in his first career Opening Day start, and new Los Angeles closer Craig Kimbrel allowed a run in the ninth before picking up the save.

Ryan McMahon, Connor Joe and Elias Diaz each had a hit and scored a run for Colorado.