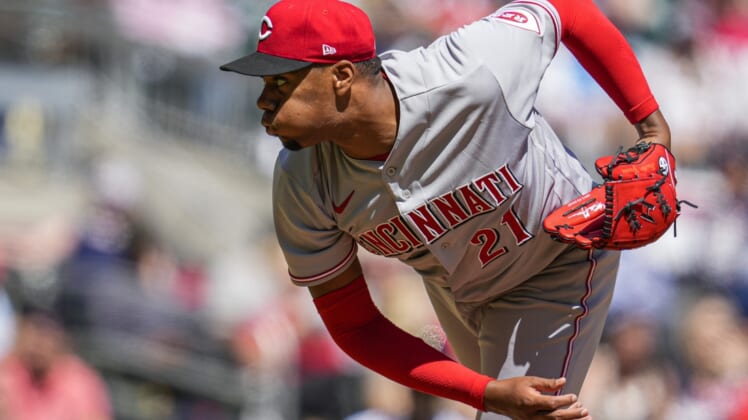 Hunter Greene was strong in his major league debut Sunday, and battery mate Tyler Stephenson homered in his hometown as the visiting Cincinnati Reds beat the Atlanta Braves 6-3 to earn a split of their four-game weekend series.

One of the most heralded pitching prospects in baseball, Greene topped 100 mph on 20 of his 92 pitches over five innings.

Atlanta’s Ian Anderson (0-1) labored in his first outing of the season, allowing five runs on three hits while matching a career high with five walks. Matt Olson homered and had another three-hit day, giving him eight hits in his first four games with the Braves.

Christian Yelich added two hits — including an RBI double — for the Brewers. Five Milwaukee relievers limited Chicago to one hit over the final five innings. Brad Boxberger (1-0) scattered a hit and a strikeout in the seventh to earn the win. Josh Hader struck out two in a perfect ninth to notch the save.

Seiya Suzuki, a Japanese outfielder who signed a five-year, $85 million contract in the offseason, launched his first major league home run for Chicago. Right-hander Marcus Stroman took a no-decision in his team debut, giving up one run and two hits in five innings, with three walks and three strikeouts.

Jhoulys Chacin tossed 1 2/3 innings of relief and Ty Blach got the save with four innings of shutout ball. Rockies starter Antonio Senzatela was lifted in the Dodgers’ four-run fourth inning. Senzatela allowed four runs on nine hits in 3 1/3 innings.

Carlos Correa, Max Kepler and Jorge Polanco also homered for Minnesota, which won for the first time in three games this season. Sanchez also had an RBI double to finish with five RBIs, and Buxton and Polanco each finished with two hits. Bailey Ober (1-0) picked up the win, allowing four runs on four hits over five innings. He walked two and struck out four.

Mitch Haniger homered, doubled and drove in three runs and Adam Frazier went 2-for-5 with an RBI and a run scored for Seattle. Marco Gonzales (0-1) suffered the loss; he allowed six runs (two earned), including three home runs, on six hits over two innings.

Brad Miller had a solo homer and four RBIs, Jonah Heim had a two-run blast and three RBIs and visiting Texas defeated Toronto.

Nick Solak also had a solo home run for the Rangers, who overcame a 6-1 deficit to salvage the finale of the three-game, season-opening series. Starter Spencer Howard allowed six runs and six hits (four home runs) in three innings. He struck out five.

Jose Abreu and Eloy Jimenez drove in two runs apiece as the White Sox won two of three in the weekend series against Detroit, which scored its lone run on Victor Reyes’ RBI triple in the second.

Making just his third career start and seventh major league appearance over three seasons, Jefferies (1-0) yielded singles to Johan Camargo and Garrett Stubbs. In addition to giving up a pair of walks, the right-hander struck out two batters while throwing 48 pitches against a potent Phillies’ offense that totaled 13 runs in winning the first two games of this set. The Phillies’ only other hit came courtesy of Jean Segura’s homer off Lou Trivino to lead off the ninth inning.

Kemp, who had one hit in the first two contests, recorded three singles, the last of which scored two in the ninth inning. Cristian Pache had two hits and Billy McKinney homered off Bailey Falter (0-1) for the A’s, who also got a combined three no-hit innings from relievers Sam Moll, Domingo Acevedo and Kirby Snead.

Nelson Cruz’s two-run single capped a three-run eighth inning Sunday afternoon as host Washington earned its first win of the season by beating New York in the finale of a four-game series.

Cruz’s first-inning homer — the 450th of his career — provided the Nationals their only offense until Washington took advantage of a pair of miscues, including a throwing error, by Mets first baseman Pete Alonso in the eighth.

The Mets scored both their runs in the fourth, when Francisco Lindor homered and Mark Canha delivered a tie-breaking single. Canha finished with three hits.

Brandon Lowe slugged a two-run homer, Corey Kluber was strong in his Tampa Bay debut and the Rays beat Baltimore for the 15th straight time.

Lowe’s shot, his first of two hits and first homer of the season, capped a four-run second inning for the Rays, who never trailed in their three-game series sweep and are 21-1 in their past 22 meetings with Baltimore. In his first Tampa Bay start, Kluber tossed 4 2/3 shutout innings with three hits. The two-time Cy Young Award winner struck out five and walked four.

Ryan Mountcastle doubled and had two of Baltimore’s six hits.

Oscar Mercado’s first career grand slam keyed a six-run first inning as Cleveland took out two games worth of frustration with a 17-3 victory in Kansas City.
Mercado had a career-high five RBIs. The Guardians, who scored just one run on 12 hits over 19 innings in losing the first two games of the series, had 13 runs and 16 hits in the first five innings. They finished with 22 hits. Steven Kwan was 5-for-5 and scored four runs. He is 8-for-10, plus three walks, so far in his debut season.

Kris Bubic (0-1) lasted just two-thirds of an inning, allowing five runs on three hits and two walks. The Royals finally got on the board in the third when Bobby Witt Jr.’s double drove in two runs.

Michael Chavis went 3-for-4 with a grand slam as visiting Pittsburgh rallied past St. Louis.

Diego Castillo went 3-for-5 and scored twice for the Pirates, who erased a 3-0 first-inning deficit to earn their first victory this season. Pirates starter Bryse Wilson allowed three runs on five hits and a walk in four innings. Miguel Yajure (1-0) followed with two scoreless innings to earn his first big-league victory.

Cardinals starter Steven Matz (0-1) allowed seven runs while retiring just nine batters. He allowed nine hits and walked one. Nolan Arenado hit a two-run homer for the Cardinals. He is 6-for-12 (including three doubles, two homers), with four runs and seven RBIs in the first three games of the season.

Garcia (1-0) needed just one pitch to get out of a fourth-inning, bases-loaded jam he inherited from another former Marlins pitcher, Anthony DeSclafani. Including Garcia, four Giants relievers combined to toss 5 1/3 scoreless innings, including Dominic Leone, who got the final three outs for the save.

Giants left fielder Heliot Ramos made his major league debut, and he singled on his first swing, a 0-1 changeup. He finished 2-for-3 with one run scored. Miami left fielder Jorge Soler had a big game, going 3-for-4 with a walk. He also stole a potential Darin Ruf homer with a leaping catch.

The Astros took three of four from the Angels in the season-opening series. Bregman went 6-for-14 with two homers, six RBIs and four runs scored in the series, and it was his two-out, two-run single in the fifth inning Sunday that put Houston up for good.

Astros starter Jose Urquidy (1-0) earned the win after giving up one run on four hits in five innings. He struck out two and did not walk a batter. Angels starter Jose Suarez (0-1) was tagged with the loss, giving up two runs on two hits and four walks in 4 1/3 innings.

Jurickson Profar hit a grand slam and Jorge Alfaro immediately followed with a solo home run off Arizona starter Caleb Smith in the second inning, and visiting San Diego went on to victory.

The Padres won the final three games of the four-game series after Arizona won the season opener on a walk-off homer by Seth Beer. Two errors, three walks and a hit batter directly led to seven of the Padres’ runs. The Diamondbacks also continued to struggle at the plate, trailing 10-1 until they scored four runs in the ninth.

Sunday’s game started with a bit of controversy. Left-hander Blake Snell was scheduled to start for the Padres and Arizona packed its lineup with six right-handed or switch hitters. But Snell never went to the mound in the first. He was scratched with left abductor tightness.