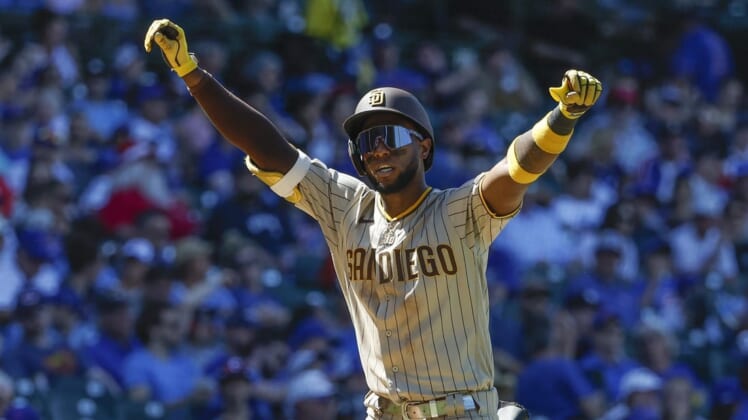 Amed Rosario drove in two runs, Triston McKenzie gave up one run over six innings and the visiting Cleveland Guardians finished off a three-game sweep of the Colorado Rockies with a 4-2 victory on Thursday in Denver.

Emmanuel Clase recorded the final three outs to pick up his 14th save for Cleveland. The Guardians are now perfect after three games of a nine-game, three-city road trip and have won four consecutive games, along with seven of their last eight.

Brian Serven and Connor Joe each had four hits in the defeat, while Charlie Blackmon finished with two hits as Colorado lost for the fifth time in seven games.

Oakland salvaged the finale of a three-game set at Boston, scoring three times in the third inning on the way to the victory.

Ramon Laureano went 2-for-4 with a run to lead the A’s, who were outhit 11-8 but managed to win their first game in six tries against Boston this season. Christian Bethancourt added a two-run single.

J.D. Martinez went 3-for-5 and drove in a run to pace the Red Sox, while Jarren Duran and Jackie Bradley Jr. had two hits apiece.

Joe Musgrove allowed two early runs and struck out a season-high nine over seven innings to remain undefeated and Manny Machado had three hits and an RBI as surging San Diego completed a four-game road sweep of reeling Chicago.

Nomar Mazara and Jurickson Profar each homered for the Padres, who outscored the Cubs 41-15 in the series. Chicago has lost a season-high 10 in a row, including six straight at home.

Musgrove (8-0) overcame some early struggles to continue this stellar season while giving up five hits and a walk for the Padres, who have won 11 of 14. Cubs rookie starter Matt Swarmer (1-2) went 3 2/3 innings and was charged with four runs on four hits and five walks. He struck out four.

Ryan Mountcastle, Rougned Odor and Tyler Nevin each had two RBIs for the Orioles, who scored six runs in the third inning. Cedric Mullins added three hits. Wells (4-4) allowed one run, five hits and a walk while striking out three.