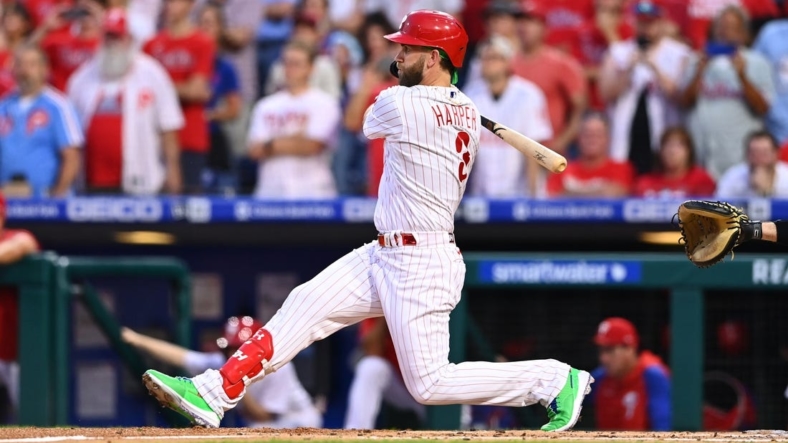 Bryce Harper hit a two-run single in his first game since June 25 and helped lead the host Philadelphia Phillies past the slumping Pittsburgh Pirates 7-4 on Friday.

Harper, the reigning National League Most Valuable Player, had been sidelined due to a broken left thumb. He finished 1-for-4 as the Phillies’ designated hitter.

Rhys Hoskins and Nick Castellanos each added two hits and an RBI and Alec Bohm had two hits for the Phillies, who led 6-0 after two innings en route to their fifth consecutive win.

Philadelphia’s Bailey Falter received the start when Zack Wheeler landed on the injured list due to right forearm tendinitis. Falter (2-3) tossed six innings and gave up five hits and three runs with six strikeouts and no walks.

Bryan Reynolds paced Pittsburgh with a home run and two RBI, and Rodolfo Castro added a homer and single. Ben Gamel also homered while Kevin Newman had two hits for the Pirates, who have dropped six straight.

Aaron Judge bombed his 49th home run, Gerrit Cole became the first in the majors to reach 200 strikeouts this season and New York made it two straight wins at Oakland.

Judge’s homer, a three-run shot in the fifth inning, accounted for all the Yankees’ scoring in their fifth consecutive win. Cole (10-6) struck out 11 in 7 1/3 innings while giving up one run on three hits and two walks.

Minor (3-10) earned his second straight win after eight consecutive losses, allowing two runs on six hits and striking out seven without a walk.

The Reds snapped a four-game skid and managed to spoil the major league debut of Washington’s top pitching prospect, Cade Cavalli (0-1), hanging the loss on the 22nd overall pick in the 2020 MLB draft. Cavalli was tagged with seven runs on six hits over 4 1/3 innings, striking out six and walking two.

Mitch Haniger led off the bottom of the 11th with a line-drive single to right field, scoring Dylan Moore from second base as Seattle defeated visiting Cleveland.

Penn Murfee (4-0) got out of a bases-loaded jam in the top of the inning to earn the victory, the Mariners’ second in a row against Cleveland. The Guardians’ Emmanuel Clase (2-3) took the loss.

Ronald Acuna Jr. and Robbie Grossman drove in two runs each for the Braves, who won for the 15th time in their past 17 games. Braves starter Spencer Strider (8-4) held the Cardinals to one run on six hits and a walk in six innings. He struck out seven.

Pete Alonso delivered a walk-off single in the ninth inning for New York, which mounted a late rally to edge visiting Colorado.

Brandon Nimmo began the winning rally by drawing a four-pitch, one-out walk against Daniel Bard (3-4), who plunked Starling Marte with his next pitch. Bard got ahead of Alonso 0-2 before Alonso singled to left. Nimmo raced home and slid in ahead of the throw as Alonso raised his arms in triumph near second base.

Edwin Diaz (3-1) worked around an unusual one-out double in the ninth — Ryan McMahon’s comebacker glanced off his foot and trickled into shallow right field — to earn the win.

Mookie Betts slugged the game-tying homer in the ninth inning and the go-ahead RBI double in the 10th, leading Los Angeles to a win over host Miami.

Betts went 4-for-6 with two homers, a double and four RBIs. He has hit a team-high 29 homers this year. With more than one month left in the season, he is three short of his career-high homer total set in 2018.

The Dodgers, who have the best record in baseball, have 42 victories in their past 51 games. Miami was led by Joey Wendle, who drove in three runs. Rookie Peyton Burdick hit a solo homer to tie the score in the bottom of the ninth.

Gilberto Celestino added a three-run double to highlight a six-run third inning for the Twins. Correa finished 2-for-3 with a walk, two runs and two RBIs while Garlick, activated from the injured list earlier in the day, finished with three hits and three runs.

Josh Rojas drove in three runs and Emmanuel Rivera and Daulton Varsho homered to support five strong innings from Tommy Henry and lift visiting Arizona to a victory against Chicago.

Varsho collected three hits as the Diamondbacks stretched their winning streak against the White Sox to six games while improving to 5-2 all-time at Guaranteed Rate Field.

Elvis Andrus had Chicago’s lone RBI, on a fourth-inning groundout, before AJ Pollock knocked a solo home run with one out in the ninth inning. Henry, a rookie left-hander, moved to 3-2 after holding the White Sox to one run on four hits in five innings.

Bradish (2-5) snapped a 12-start winless streak by handcuffing the Astros over eight scoreless innings. He allowed two hits, both singles, and walked a pair of batters. He retired 13 of the final 14 batters he faced.

Bradish recorded his first win since limiting the St. Louis Cardinals to two runs on four hits with a career-high 11 strikeouts over seven innings on May 10, helping snap the Astros’ seven-game home winning streak in the process. Houston was last shut out at home on June 18.

Andrew Velazquez and Mike Trout each added two-run home runs for the Angels, who had their six-game losing streak end. The Blue Jays, coming off a 6-1 road trip, had won three straight.

Wil Myers had a double and a home run among his three hits, and he added three RBIs, as visiting San Diego pounded Kansas City.

The first six Padres runs scored with two outs. Jose Azocar added a career-high four hits for the Padres. It was the Padres’ first visit to Kauffman Stadium since 2002 and just their second trip to Kansas City all-time.

Mark Mathias went 3-for-4 with a two-run homer to lift Texas past Detroit in Arlington, Texas, for its fifth win in six games.

Glenn Otto (6-8) got the win after allowing four runs on five hits in five innings. Jose Leclerc notched his second save despite allowing two runs in the ninth.

Riley Greene hit a home run, a triple and a single, driving in four runs in defeat for the Tigers, who had won three of their previous four.

Ian Happ belted his second two-run homer of the game in the 10th inning as visiting Chicago made the most of its only two hits to earn a victory over Milwaukee.

While Happ went 2-for-4, the rest of the Cubs went 0-for-28 with eight strikeouts. Happ launched a two-run homer in the seventh inning to stake the Cubs to a 2-1 lead. The advantage stood up until Rowdy Tellez belted his team-leading 27th homer to lead off the ninth, but Happ answered in the 10th to give Chicago a 4-2 lead.

Milwaukee starter Freddy Peralta did not allow a hit while striking out five and walking one over six scoreless innings.

Boston trailed 4-1 after three innings before scoring two runs in both the fourth and fifth, three on a Xander Bogaerts homer in the sixth, and another in the seventh. Enrique Hernandez (3-for-5, run, RBI) and Kevin Plawecki (3-for-4, double, two RBI) helped the Red Sox snap a four-game skid. Bogaerts, Tommy Pham and Alex Verdugo each collected two hits, and Franchy Cordero also homered.

Yandy Diaz, Ji-Man Choi and Jose Siri homered for Tampa Bay, which had won its previous six games. Siri cut Boston’s lead to one with a three-run blast in the eighth.