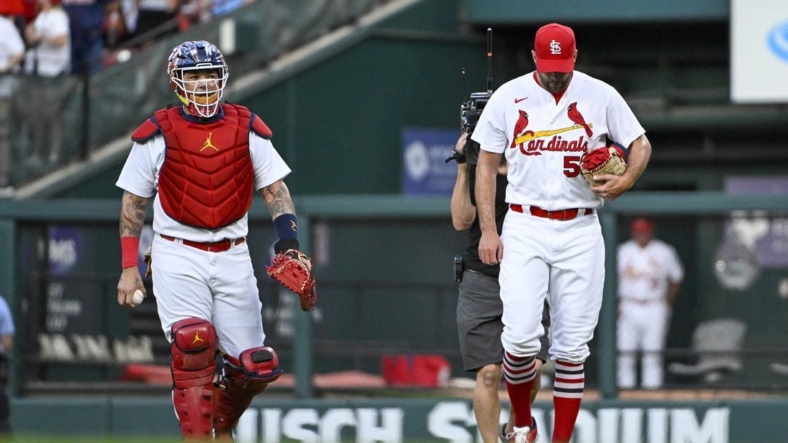 In their record-setting 325th start together, pitcher Adam Wainwright earned the win and catcher Yadier Molina drove in a run as the St. Louis Cardinals beat the visiting Milwaukee Brewers 4-1 Wednesday.

Wainwright and Molina broke the career mark for starts by batterymates, topping the record set by Mickey Lolich and Bill Freehan of the Detroit Tigers from 1963-75.

Nolan Arenado and Lars Nootbaar hit home runs for the National League Central-leading Cardinals, who increased their edge over the second-place Brewers to eight games.

Wainwright (11-9) limited the Brewers to one run in five innings. Ryan Helsley tossed a scoreless ninth for his 17th save. Brewers starter Corbin Burnes (10-7) allowed three runs in seven innings.

Rodriguez was hit by a pitch to lead off the fifth inning and proceeded to swipe second, his 25th stolen base. Arizona’s Chris Young (2007) and the Los Angeles Angels’ Mike Trout (2012) also reached the 25-25 plateau in their rookie seasons, but both had made their major league debuts a year earlier.

Austin Wynns drove in three runs, Carlos Rodon struck out eight in five sharp innings, and San Francisco made it two of three over visiting Atlanta.

Robbie Grossman went 3-for-3 and William Contreras added two hits for the Braves, who lost for the fourth time in their past five games.

The victory was Cleveland’s sixth consecutive as the Guardians increased their lead in the American League Central to four games over the second-place Chicago White Sox.

Oscar Gonzalez had a home run among his three hits for the Guardians, while Andres Gimenez also had three hits. Mickey Moniak homered and doubled for the Angels, who also got two hits each from Mike Trout, Taylor Ward and Luis Rengifo.

Gunnar Henderson hammered a two-run triple and scored on the play during a game-turning sequence in the seventh inning as Baltimore won at Washington. The Orioles posted four runs in the inning, capped by Jorge Mateo’s solo home run.

Henderson drove in four runs — the final of those on an eighth-inning double. Baltimore swept the two-game set and ended up winning three of four meetings with Washington this year.

Kyle Freeland pitched into the seventh inning and visiting Colorado earned a two-game split of its interleague series against Chicago.

Freeland (9-9) allowed seven hits over 6 2/3 scoreless innings. Daniel Bard struck out the side in the ninth for his 30th save. Colorado snapped a two-game losing skid and won for just the seventh time in its last 27 road games.

Andrew Vaughn and Elvis Andrus had two hits apiece for the White Sox, who left nine runners on base and were 0-for-11 with runners in scoring position.

Oneil Cruz also homered, Ke’Bryan Hayes had three hits and an RBI, and Bryan Reynolds contributed two hits for the Pirates, who tied their longest winning streak of the season at four games.

Reds rookie Nick Lodolo (4-6) struck out 11 strikeouts for the second straight game. In 6 1/3 innings, he gave up three runs and six hits without a walk.

Bryce Harper also went deep for the Phillies, who earned their fifth consecutive win. Kyle Gibson (10-6) reached double-digit wins for the seventh time in his 10-year career. He went six innings, allowing one run on six hits and no walks while striking out seven.

Kyle Tucker hit a solo home run in the fourth for his third long ball in four games as the Astros finished their season series against the Tigers with a perfect 7-0 mark. Houston’s other run came on a sacrifice fly from Alex Bregman.

The Blue Jays have won three of the first four games of the five-game series between teams battling for seeding in the American League wild-card race. Harold Ramirez hit a solo home run for the Rays, who have lost five of their past six.

Toronto right-hander Ross Stripling (8-4) allowed one run, three hits and one walk while striking out four in 6 1/3 innings.

Gleyber Torres went 3-for-5, driving in a run and scoring another on an error-filled play in the fifth inning, to spark New York in a win at Boston.

Jose Trevino also recorded an RBI for the Yankees, who swept the two-game series and have won four straight. Nestor Cortes (10-4) struck out seven in five innings of three-hit, one-run ball.

The Red Sox committed three errors, including a pair in the fifth that led to all three runs scored against starter Brayan Bello (1-6). Despite the defeat, Bello fanned six in five innings.

The Mets were swept in a three-game series for the first time this season. The three-game losing streak matches a season high for New York, which remains a half-game ahead of the Atlanta Braves in the National League East.

Two-run doubles from Yan Gomes and P.J. Higgins highlighted the first-inning outburst. Cubs starter Drew Smyly (7-8) gave up two runs, one earned, over five innings, and Mark Leiter Jr. blanked New York in the ninth for his second save.

Sonny Gray scattered three hits over seven innings and Gary Sanchez had a two-run double to lead Minnesota to a victory over Kansas City in Minneapolis.

It was the sixth straight victory over the Royals for Minnesota, which closed to within one game of the second-place Chicago White Sox in the American League Central while remaining five games behind first-place Cleveland. The Twins play five games in four days against the Guardians beginning on Friday night in Cleveland.

Gray (8-4) walked one and struck out eight while improving to 3-0 with a 0.47 ERA in three starts against Kansas City this season.

With Oakland down to its final out, Vimael Machin ripped a game-tying double and Stephen Vogt reached on an error that brought home the decisive run as the Athletics rallied for a victory in Arlington, Texas.

Tyler Cyr (1-0) got his first major league win after throwing 1 2/3 scoreless innings. Domingo Acevedo entered to record the final out and earn his first career save.

Dermis Garcia, Seth Brown and Tony Kemp homered for the A’s, who posted just their third win in 13 games. Mark Mathias, Marcus Semien and Jonah Heim went deep for the Rangers, who are in a 4-14 skid.