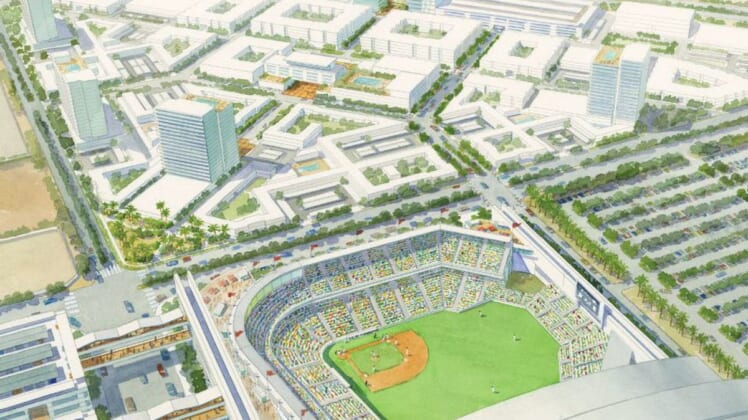 Las Vegas already has the Raiders of the NFL, the Golden Knights of the NHL, and a thriving minor league baseball team in the Las Vegas Aviators. Are current MLB relocation rumors this time a sure thing?

The professional sports renaissance in Las Vegas started in 2016 when the NHL approved the city for its first major league sports franchise – the Vegas Golden Knights. A year later, the NFL approved the relocation of the then Oakland Raiders, and the State of Nevada funded the team’s new home Allegiant Stadium with the use of visitor’s hotel tax revenue. Now, with rumors swirling around MLB relocation to the city, who is most likely to call Las Vegas home, and how much of a sure thing is it?

The MLB to Las Vegas rumors have been swirling for the past three years and now, there’s plenty of fire to go with the smoke.

In 2019, reports the Arizona Diamondbacks, who badly want to replace the aging Chase Field in downtown Phoenix, explored a move to the Las Vegas suburb of Henderson. Henderson, who aggressively pursued the Diamondbacks with a $1 Billion retractable domed stadium in the pitch, didn’t win out but it showed MLB’s interest in the growing market and instantly validated it as a market for the future.

Although the MLB relocation rumor didn’t amount to substantive talks past a proposal, it showed the team’s – and the league’s – interest in placing a team in the growing market where disposable fan income outpaces some larger metropolitan areas.

Just this week, reports indicated the Oakland A’s, who, much like their former roommates at the deplorable Oakland-Alameda Coliseum the Raiders found out, are unable to find a stadium solution in the Bay Area and are taking a long look at Las Vegas as a possible new home. This MLB relocation rumor has some serious legs and could be the precursor to a more serious commitment or look at the market by the league.

We have instructed the Athletics to begin to explore other markets while they continue to pursue a waterfront ballpark in Oakland. – MLB Statement

According to the report by the Las Vegas Review-Journal‘s Ron Kantowski, the A’s top brass is expected to visit Las Vegas to learn more about the market and tour possible stadium sites. The report indicates Oakland owner Dave Kaval will be among the group of executives who visit Las Vegas to explore the possibility of moving to Las Vegas. The visit comes a week after MLB issued a statement declaring the A’s current stadium as no longer viable.

The Oakland A’s AAA affiliate, the Las Vegas Aviators, are already in Las Vegas and are a popular ticket at their new stadium in the well-to-do suburb of Summerlin. So the Oakland brass is very familiar with the Las Vegas market.

VegasSportsToday.com has been told by numerous sources with city and county planning access, one possible location for a new baseball stadium for the A’s could be on South Las Vegas Boulevard between the newly opened Starr Avenue and St. Rose Parkway, close to the M Resort. The site of the current Rio Hotel & Casino on Flamingo Road, just of the famed Las Vegas Strip, has also long been rumored as a site for a new stadium as well.

“We have instructed the Athletics to begin to explore other markets while they continue to pursue a waterfront ballpark in Oakland,” the MLB statement said.

Still, while a waterfront ballpark for the A’s seems almost impossible, what seems more probable is the team more than likely will become the next MLB relocation target. The last MLB relocation took place in 2005 when the then Montreal Expos moved to Washington, D.C., and became the Washington Nationals. The Athletics have a long history of relocating (sound familiar, Raiders fans?) as they were originally founded as the Philadelphia A’s, then moved to Kansas City before settling in Oakland in 1968.

The chances of an MLB relocation to Las Vegas seems a good bet at this point, but other cities are courting the A’s as well. Those include Portland, Charlotte, Nashville, and a host of others.

As the Oakland A’s leadership looks at the viability of a possible domed baseball stadium in Las Vegas, one thing is certain: the MLB relocation rumors won’t die down anytime soon.

What do you think? Will the Oakland Athletics become the Las Vegas A’s?