It seems like the Kansas City Royals are a really good story in the MLB playoffs. And while that is still very much true, the payroll gaps between some teams in the second season tell us a story that Bud Selig and Co. might not want you to hear. 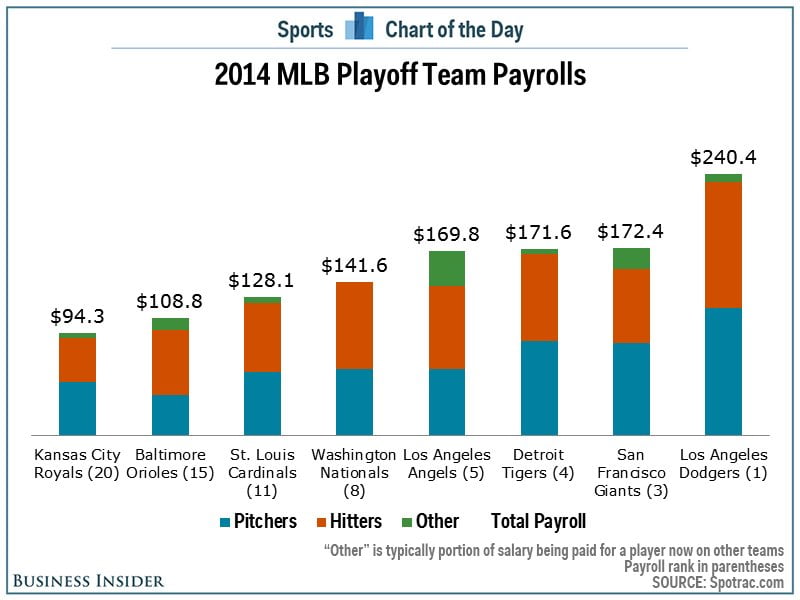 Business Insider points to the Los Angeles Dodgers and outfielder Andre Ethier, who is currently in the midst of a five-year, $85 million contract. Despite hitting just four homers during the regular year, the Dodgers ability to spend money enabled them to overcome this. That’s obviously something the Kansas City Royals simply wouldn’t be able to overcome.

Let’s look at one of the two teams, the Oakland Athletics, who were knocked out of the playoffs in the wild card round.

Oakland boasted a payroll of $93.7 million during the 2014 season. By designating Jim Johnson for assignmnet about midway through the year, the A’s ate $10 million in dead money. While this obviously didn’t play a role in trading away Yoenis Cespedes for a rental in Jon Lester, it may very well have disabled Billy Beane’s ability to actually go out there and pick up a larger contract in a trade while giving up a lesser haul as it relates to prospects.

Again, this is an issue that teams like the Dodgers and Angels don’t have.

The only team among the top-five in MLB payrolls to not make the playoffs were the New York Yankees. And as Business Insider pointed out, none of the bottom-10 teams as it relates to payroll is still alive as I type this.

While Pittsburgh and Kansas City may very well be good stories, they are stories that we have seen in the past. The Tampa Bay Rays and Oakland Athletics have been a fixtures in the playoffs for years now. But as evidenced by their inability to win the World Series, their financial shortcomings end up being a handcuff when the playoffs roll around.

Let’s hope for the sake of the Cinderella, this isn’t the case in 2014.