MLB announces 10-game ban for use of foreign substances 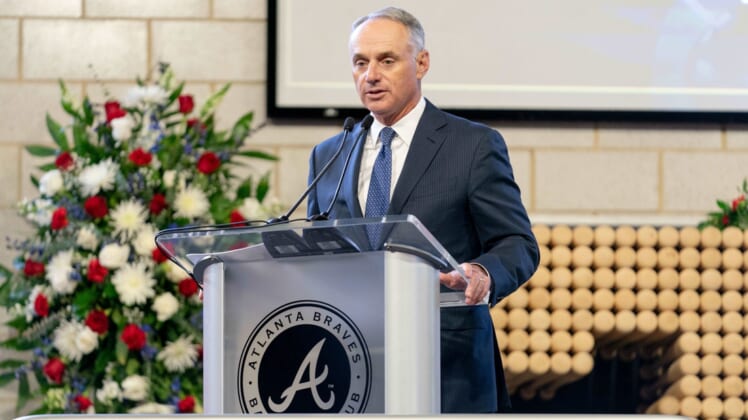 The league announced on Tuesday that enhanced enforcement of Official Baseball Rules 3.01 and 6.02(c) and (d), which prohibit applying foreign substances to baseballs, will go into effect beginning with Monday’s games.

Players who are caught with foreign substances — ranging from the common sunscreen/rosin combination to the more extreme Spider Tack — during a game will be automatically ejected and suspended for 10 games (with pay), with repeat offenders subject to longer suspensions.

In addition, teams will not be able to replace suspended players. Club employees will also face discipline if they fail to comply with these rules. All pitchers can keep using rosin bags on the mound, but they will be checked periodically by umpires throughout games even if they aren’t suspected of using other substances.

“After an extensive process of repeated warnings without effect, gathering information from current and former players and others across the sport, two months of comprehensive data collection, listening to our fans and thoughtful deliberation, I have determined that new enforcement of foreign substances is needed to level the playing field,” MLB Commissioner Rob Manfred said in a statement. “I understand there’s a history of foreign substances being used on the ball, but what we are seeing today is objectively far different, with much tackier substances being used more frequently than ever before. It has become clear that the use of foreign substance has generally morphed from trying to get a better grip on the ball into something else — an unfair competitive advantage that is creating a lack of action and an uneven playing field.”

In addition to addressing any potential competitive imbalances that have occurred as a result of the use of foreign substances, Major League Baseball is also trying to address safety concerns. The hit-by-pitch ratio has increased along with the prevalence of foreign substance use. Through May 31st, the 2021 season has the highest rate of hit-by-pitches of any season in the past 100 years, according to MLB.

Official Baseball Rule 3.01 states that “no player shall intentionally discolor or damage the ball by rubbing it with soil, rosin, paraffin, licorice, sand-paper, emery-paper or other foreign substance.” Rule 6.02(c) (“Pitching Prohibitions”) expands on Rule 3.01 by providing, among other things, that a pitcher may not “apply a foreign substance of any kind to the ball;” “deface the ball in any manner;” throw a shine ball, spit ball, mud ball, or emery ball; “have on his person, or in his possession, any foreign substance;” or “attach anything to his hand, any finger or either wrist (e.g., Band-Aid, tape, Super Glue, bracelet, etc.).”

Catchers will also be subject to routine inspections by umpires. But position players will not be ejected for having a foreign substance on their glove or uniform unless umpires determine that the players were applying the substance to the ball in order to aid a pitcher.

Any player who refuses to cooperate with an inspection conducted by the umpires will be presumed to have violated the rules, resulting in an ejection from the game and a suspension. The use of foreign substances is not subject to challenge using MLB’s replay review system.