Mississippi State rallies past No. 20 Ole Miss in second half 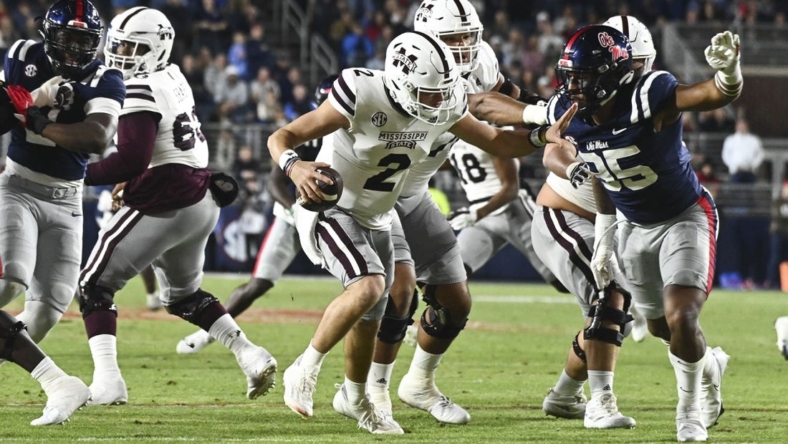 Will Rogers threw two touchdown passes and the Mississippi State defense shut down No. 20 Ole Miss’ running game in a 24-22 victory in the Battle for the Golden Egg on Thursday night in Oxford, Miss.

The Bulldogs (8-4, 4-4 Southeastern Conference) held the Rebels’ running back tandem of Quinshon Judkins and Zach Evans, who came in averaging a combined 208 rushing yards, to 87 yards and ended a two-game losing streak in the long-time rivalry.

After a Rebels fumble, the Bulldogs had a chance to score again, but Rogers lost a fumble at the Ole Miss 1-yard line.

On the first possession of the game, Ole Miss needed just three plays to drive to a first down at the Mississippi State 15. However, the Rebels stalled and Jonathan Cruz kicked a 32-yard field goal.

The Bulldogs responded quickly, driving 61 yards on the ensuing possession, which ended with Jo’quavious Marks running 1 yard for a touchdown and a 7-3 lead.

Ole Miss drove to a first down at the Mississippi State 18 on its third possession and stalled again. Cruz’s 33-yard field goal trimmed the lead to 7-6 at the end of the first quarter.

Cruz added a 49-yard field goal to give the Rebels a 9-7 lead early in the second quarter.

The Rebels drove to the Mississippi State 1, and on fourth-and-goal Dart threw a 1-yard touchdown pass to JJ Pegues for a 16-7 lead.