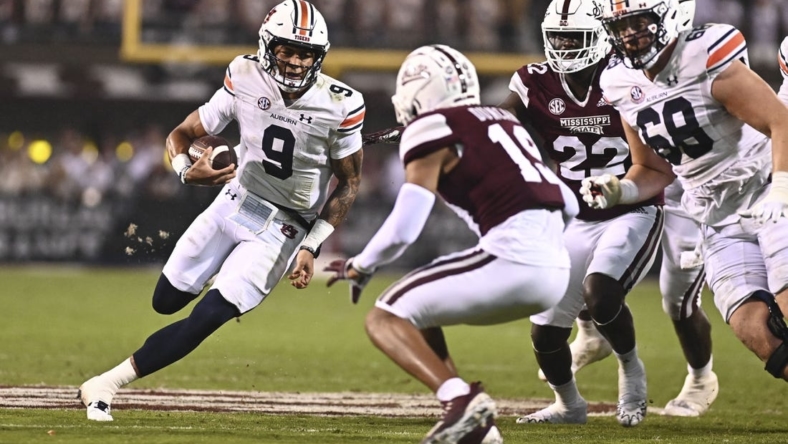 After Auburn’s Anders Carlson missed a 38-yard field goal wide right to open overtime, Auburn’s J.D. Rhym was called for defensive pass interference. The penalty gave the Bulldogs a first down at the 5-yard line, setting up the game-winning score.

Mississippi State quarterback Will Rogers went 42-for-59 passing for 357 yards, with three touchdowns and an interception. Rara Thomas had six catches for 84 yards and two touchdowns for the Bulldogs (6-3, 3-3 SEC), who stopped a two-game slide.

Auburn quarterback Robby Ashford went 7-for-22 passing with no touchdowns or interceptions, in addition to running for 108 yards and two third-quarter touchdowns on 18 carries. Tank Bigsby added 89 yards and a score on 13 carries as Auburn (3-6, 1-5) dropped its fifth straight game and suffered its 11th loss in its past 14 games dating to last season.

Mississippi State’s Massimo Biscardi tied the game with a 44-yard field goal with 29 seconds left after Auburn’s Jarquez Hunter gave the Tigers a 33-30 lead with an 8-yard touchdown run with 1:05 remaining.

Auburn had trailed by 18 points in the second half and by 21 earlier in the game.

Trailing 24-6 at halftime, Auburn pulled to within 24-12 on Ashford’s 20-yard run less than two minutes into the third quarter before his 18-yard touchdown run trimmed it to 24-19 with 4:18 left in the quarter.

Bigsby’s 41-yard burst down the sideline gave Auburn a 25-24 lead after a failed two-point conversion with 6:36 remaining.

But Rogers marched the Bulldogs 65 yards in eight plays, punctuating the drive with his second scoring strike to Thomas for a 30-25 lead after the missed two-point conversion with 3:49 left.

Mississippi State led by as many as 21 points in the first half after Lideatrick Griffin’s 92-yard kickoff return for a touchdown gave the Bulldogs a 24-3 lead with 8:12 left in the second quarter.