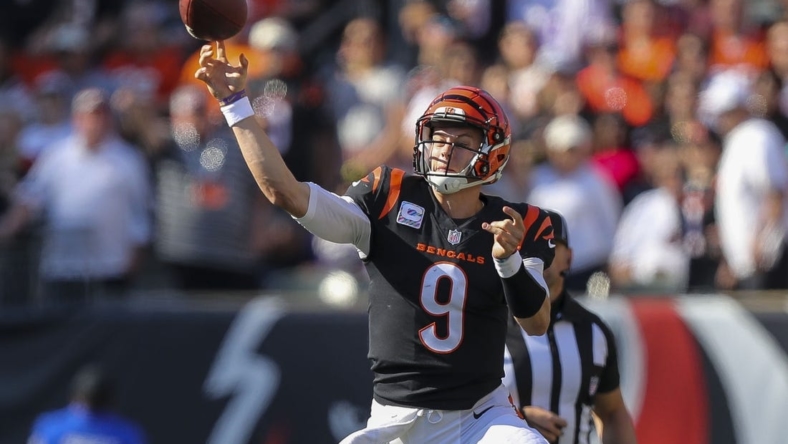 Joe Burrow and the Cincinnati Bengals will begin life without star wide receiver Ja’Marr Chase on Monday night when they visit the in-state rival Cleveland Browns.

Burrow completed 34 of 42 passes for a season-high 481 yards and three touchdowns in the Bengals’ 35-17 victory over the Atlanta Falcons last Sunday. He was named the AFC Offensive Player of the Week on Wednesday, the same day Chase reportedly met with a hip specialist.

On Thursday, ESPN reported Chase is expected to miss four to six weeks with a hip injury. It’s possible he’ll be placed on injured reserve.

Last season’s NFL Offensive Rookie of the Year, Chase was off to a fast start in 2022. He leads the team in catches (47), receiving yards (605) and receiving touchdowns (six), with four of those scores coming in the last two games.

Fellow wideouts Tee Higgins (31 catches, 455 yards, two touchdowns) and Tyler Boyd (29, 455, three) will be looked upon to pick up the slack for the Bengals (4-3), who have won four of their last five games to move into a tie for first place in the AFC North entering Week 8.

While Burrow’s recent play was trending up, he sports an 0-3 career record against the Browns. He sat out last year’s visit to Cleveland with the Bengals resting their starters prior to the playoffs.

“Last year they did a good job of creating turnovers, we didn’t do a good enough job of protecting the ball,” Burrow said. “You have to credit them for that. And then, going back to my rookie year, same thing, they’ve been able to create turnovers on us. We moved the ball for the most part, but we’ve just got to be able to protect the ball and the defense will be able to do what they do.”

The Browns (2-5), in turn, will look to reverse their fortunes and end a four-game losing skid on Monday.

Nick Chubb boosted his NFL-leading rushing total to 740 yards after running for 91 on 16 carries in Cleveland’s 23-20 setback to the Baltimore Ravens last Sunday.

Tight end David Njoku had seven catches for 71 yards before sustaining an ankle injury in that game. Njoku, however, is keeping an optimistic mindset for his availability against the Bengals.

“We’ll see,” Njoku said Thursday. “It’s feeling better every day, so hopefully we can just see how it progresses.”

Cleveland’s Deion Jones recorded five tackles — including one for a loss — in his season debut versus the Ravens. The Pro Bowler likely will be elevated to a starter’s role after fellow linebacker Jacob Phillips (pectoral) was placed on injured reserve.

“That’s a big loss for us,” Jones said. “(I’m) just constantly on the grind, getting in the playbook, learning all I can learn and (want to) pick up from where he left off.”