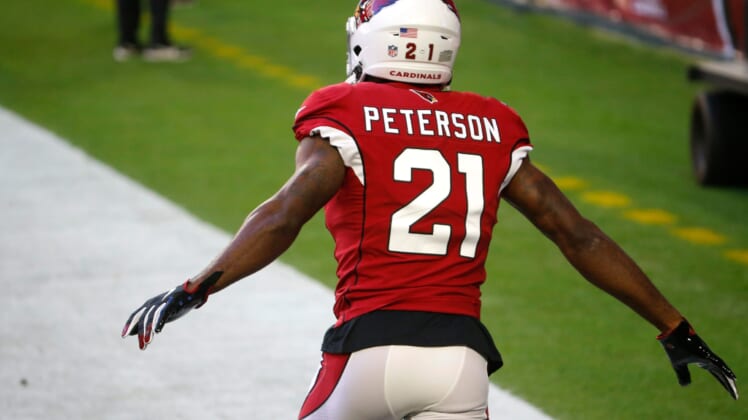 Cardinals’ Patrick Peterson (21) takes the field before a game against the Eagles at State Farm Stadium in Glendale, Ariz. on Dec. 20, 2020.Cardinals Vs Eagles

Apparently, general manager Rick Spielman was not done quite yet. According to ESPN’s Adam Schefter, Minnesota has shockingly signed future Hall of Fame cornerback Patrick Peterson away from the Arizona Cardinals. The deal is said to be worth $10 million for one season.

While the 30-year-old Peterson is not the player he once was, the eight-time Pro Bowler can still contribute as a starter. Last season for the Cardinals, he recorded three interceptions. That represented his highest total since back in 2016. Even more to the point, Peterson has allowed just one 100-yard game over the past five seasons.

How the Patrick Peterson signing helps the Minnesota Vikings

It’s rather clear. Once Minnesota moved off fellow Pro Bowler Xavier Rhodes last offseason, the team’s pass defense took a major hit. It was void of much experience in the back end, leading to major regression stopping the run. Just look at opposing quarterback ratings over the past few seasons.

Getting younger on defense is one thing. Not having the experience to run Mike Zimmer’s complex defensive scheme is a completely different monster. The Minnesota Vikings knew full well that they made a mistake by releasing Rhodes. They are attempting to right that wrong by signing Patrick Peterson

An end of an era for Patrick Peterson in the desert

The other backdrop here is Peterson’s status as one of the greatest players in Arizona Cardinals franchise history. Since the team made him a top-five pick back in 2011, he’s been the face of Arizona’s defense.

That has included eight trips to the Pro Bowl, three All-Pro honors and an inclusion on the NFL All-Decade Team for the 2000s. Peterson is going to be a Hall of Famer. He’ll head to Canton honoring the Arizona Cardinals. That much is known.

One also now has to wonder if this is the end for both Peterson and fellow longtime Cardinals teammate Larry Fitzgerald. The all-time great wide receiver is not yet decided about playing in 2021. However, Arizona’s decision to sign A.J. Green on Wednesday might change that.

Heck, could Peterson and Fitzgerald reunite in Minnesota for an opportunity at that elusive Super Bowl title? Stranger things have happened.