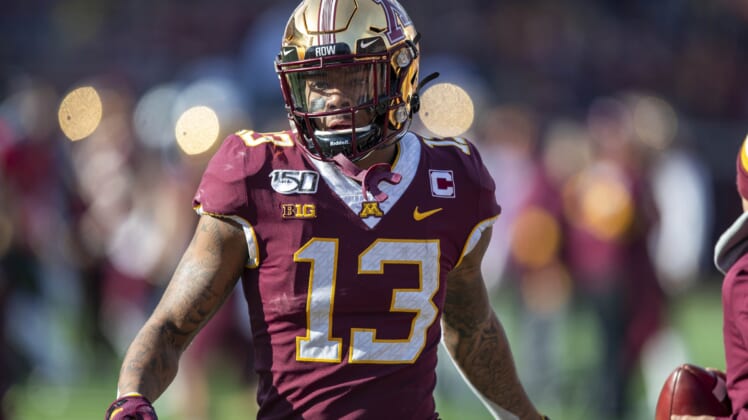 Minnesota Golden Gophers wide receiver Rashod Bateman announced Tuesday that he will forego his junior season and declare for the 2021 NFL Draft, amid the uncertainty created by the COVID-19 pandemic.

Bateman, a projected first-round pick next year, becomes the second college football star to announce they will skip the upcoming season and prepare for entry into the NFL.

Bateman proved to be one of the best receivers in college football this season, emerging as a star in Minnesota’s offense. He earned first-team All-Big Ten honors and played an integral role in the Golden Gophers’ 11-2 season.

The decision to opt-out of the upcoming football season comes on the same day the Big Ten is expected to release its conference-only schedule for the 2020 season. However, growing concerns about the health risks of playing during the COVID-19 pandemic are leading many collegiate stars to question if they should play this year.

Many have anticipated top draft-eligible prospects will skip the 2020 season to focus entirely on preparing for the 2021 NFL Draft. Bateman now joins Virginia Tech cornerback Caleb Farley as the second projected first-round pick to opt-out for this season.

With Bateman now stepping away from the team, Minnesota’s offense will face the immense challenge of replacing their two 1,000-yard receivers (Bateman and Tyler Johnson) this season.

NFL teams are looking for big, explosive threats at wide receiver and Bateman fits that mold. While he only played two seasons with the Golden Gophers, he showcased skills that will translate to the next level.

Bateman’s stats this past season were absurd, averaging 20.3 yards per catch as one of the country’s best big-play threats. He turned 60 catches into 1,219 receiving yards, hauling in 11 touchdowns along the way.

Before he enrolled at Minnesota, this star receiver was already drawing attention. Bateman’s 4.4 40-yard dash time attracted plenty of attention and his highlights this season backed up the stopwatch.

Before he enrolled at Minnesota, this star receiver was already drawing attention. Bateman’s 4.4 40-yard dash time attracted plenty of attention and his highlights this season backed up the stopwatch.