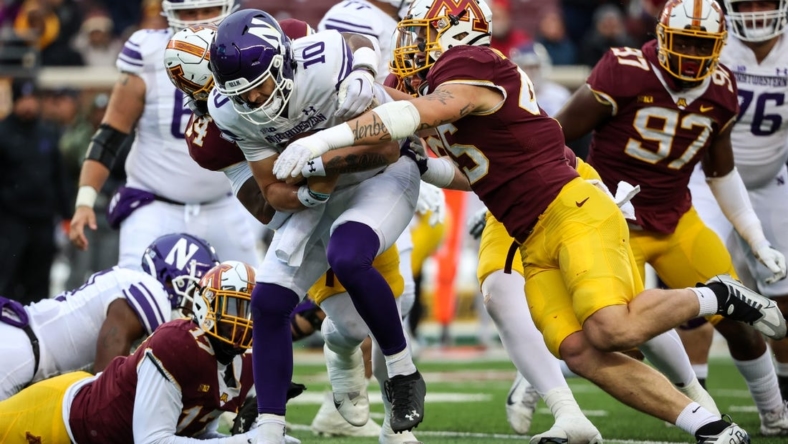 Mohamed Ibrahim rushed for 178 yards and three touchdowns on 36 carries to lead Minnesota to a 31-3 home win over Northwestern in a Big Ten West contest on Saturday.

Kaliakmanis only attempted 13 passes, completing seven of them for 64 yards.

The Golden Gophers moved into a four-way tie for first place in the Big Ten West.

Malik Washington caught six passes for 97 yards and quarterback Brendan Sullivan went 9-of-11 passing for 94 yards in defeat for Northwestern (1-9, 1-6), which has lost nine straight since a season-opening win over Nebraska in Dublin.

Minnesota took a 7-0 lead with 3:04 remaining in the first quarter on a 6-yard touchdown run by Ibrahim, a scoring play that finished off a 9-play, 82-yard drive.

The Golden Gophers took a 14-0 lead with 7:57 left in the second quarter on a 1-yard touchdown run by Ibrahim.

Northwestern got on the board with 1:27 remaining until halftime, cutting Minnesota’s lead to 14-3 after a 35-yard field goal by Adam Stage.

On its first drive of the second half, Minnesota took a 17-3 lead after a 41-yard field goal by Matthew Trickett with 12:16 left in the third quarter. The field goal came after the Golden Gophers got the ball at the 25-yard line of Northwestern following an interception.

Ibrahim then scored on another 1-yard touchdown run with 14:57 remaining to give Minnesota a 24-3 lead.

Trey Potts flanked Ibrahim by rushing for 63 yards on 10 carries for Minnesota.