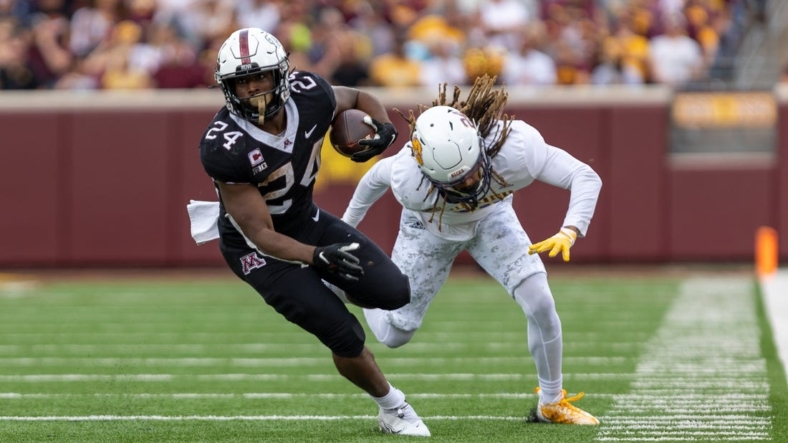 Mohamed Ibrahim and Trey Potts each tallied two of Minnesota’s seven rushing touchdowns as the Golden Gophers cruised past Western Illinois 62-10 on Saturday in Minneapolis.

Ibrahim finished with 23 carries for 130 yards and has rushed for over 100 yards in 11 straight games. Potts added 79 yards on 10 carries, and quarterbacks Tanner Morgan and Athan Kaliakmanis also found the end zone on the ground before Preston Jelen’s 30-yard score in the fourth quarter.

Morgan was efficient through the air, throwing for 287 yards and a touchdown on 14-for-18 passing.

Leathernecks quarterback Nick Davenport completed 8 of 15 passes for 125 yards and a touchdown. Jafar Armstrong had five catches for 72 yards, and Naseim Brantley hauled in a 33-yard touchdown pass late in the game.

Minnesota amassed 679 yards of total offense to 194 for the opponent.

It took the Golden Gophers (2-0) just seven plays to march 96 yards down the field in a second-quarter drive that helped them go into halftime with a 31-3 lead. Chris Autman-Bell’s 54-yard reception headlined the downfield push, and Potts’ 2-yard run finished it off.

Autman-Bell tallied 118 yards in the first half alone, while Morgan completed 11 of 15 passes for 223 yards.

Mason Laramie provided Western Illinois’ only points of the half with his 47-yard field goal late in the first quarter.

Minnesota continued to pour it on in the third quarter.

Ibrahim scored his second touchdown of the day on the team’s opening drive of the third before Jordan Howden intercepted Henry Ogala’s pass on the first play of Western Illinois’ ensuing drive. Morgan then found a wide-open Brevyn Spann-Ford for a 45-yard touchdown to extend the Gophers’ lead to 45-3.

Receiver Michael Brown-Stephens fumbled on Minnesota’s first drive of the game, giving Western Illinois prime field position at the Gophers’ 45. But the Leathernecks failed to convert a fourth-and-3, giving the ball back to the Gophers.

Minnesota followed with a 12-play, 60-yard drive that was capped off by Ibrahim’s 1-yard rushing touchdown to open the scoring.