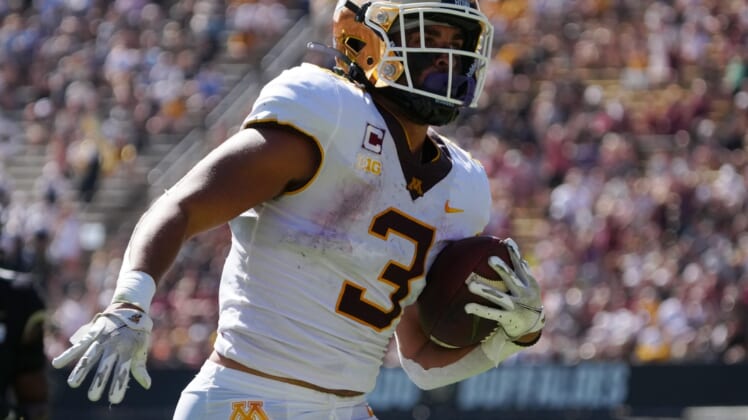 Treyson Potts rushed for 121 yards and three touchdowns, Tanner Morgan was 11-for-17 passing for 164 yards, and the Minnesota Golden Gophers beat the Colorado Buffaloes 30-0 in Boulder, Colo., on Saturday.

Ky Thomas also ran for 66 yards and a score, Chris Autman-Bell had four receptions for 79 yards and Mar’Keise Irving had 89 yards rushing for the Gophers (2-1, 0-1 Big Ten).

The Gophers moved to the Colorado 6 on their opening drive but came up empty when Matt Trickett missed a 24-yard field goal attempt.

Minnesota got on the board two drives later after starting at its own 18. The Gophers converted a third-and-5 with a 32-yard pass to Autman-Bell to the Buffaloes’ 13, and two plays later, Potts ran it in from the 13. Trickett missed the extra point as Minnesota led 6-0.

Colorado got one first down on its next drive but was forced to punt, giving Minnesota the ball at its own 38. Morgan connected with Dylan Wright on a 39-yard pass to the Buffaloes’ 21. Potts carried it on four straight plays, scoring from two yards out to put the Gophers ahead 13-0.

Minnesota stretched the lead late in the third quarter. Colorado got the ball at its own 40 but Lewis fumbled on a three-yard run, giving the Gophers the ball at the 43. A pass interference moved the ball to the Buffaloes’ 17 and Minnesota turned to Potts again.

He converted a fourth-and-1 from the Colorado 8 and scored two plays later on a 3-yard run with 23 seconds left in the third quarter to put the Gophers ahead 20-0.

The Buffaloes muffed a punt at their own 33 that led to Trickett’s 33-yard field goal with 9:53 left. Thomas closed out the scoring with a 14-yard TD run with 5:09 remaining.