The Milwaukee Bucks were in real danger of trailing 3-0 in their second-round series against the Brooklyn Nets, but found a way to prevail 86-83 in Thursday’s Game 3 at home.

It would’ve been absolutely devastating to be pushed to the precipice of elimination. Getting swept would’ve almost certainly cost Bucks head coach Mike Budenholzer his job, and brought into question whether Giannis Antetokounmpo could one day lead Milwaukee to an NBA championship.

But at least for now, the Deer doubters are being held at bay. Given that the Bucks shot only 37.8% from the field and bricked 25 of 31 3-point attempts, you have to commend their resolve to get this “W” in Wisconsin.

Thanks to a 30-11 first quarter, Milwaukee built a massive lead, then relied on its defensive prowess to force Kevin Durant into an off night. The hosts gave the Nets their best punch, and it landed. 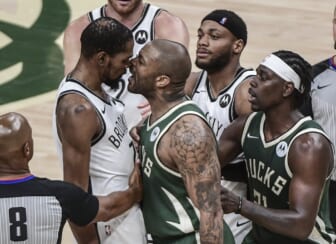 Also Read:
Keys for Milwaukee Bucks to rally in series vs. Nets after Game 3 win

Winning a gritty, low-scoring affair like this can do wonders for momentum. Maybe it’ll lead to the Bucks taking advantage of their size, getting more physical with their finesse-based adversary and go back to Brooklyn with the series knotted at two, at the very least.

That said, Khris Middleton (35 points) and Giannis (33) probably can’t account for nearly 80% of Milwaukee’s points in the upcoming contests if this team is expected to send the Nets packing.

Anyway, without further ado, here’s the best reaction from social media from Game 3.