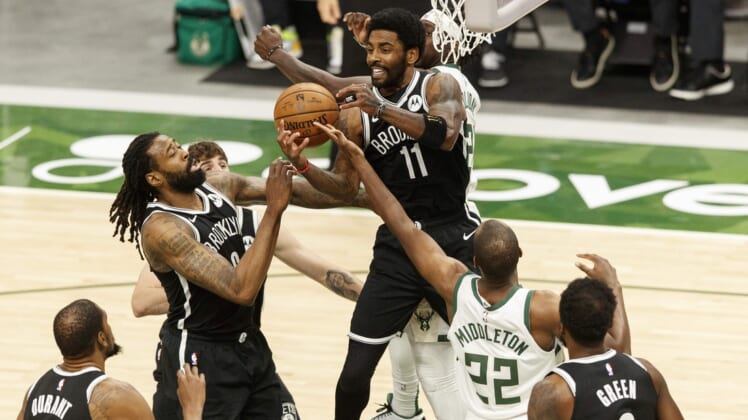 Giannis Antetokounmpo made 4-of-12 3-pointers en route to a team-high 36 points, grabbed 12 rebounds, and the Milwaukee Bucks scored their second win over the Brooklyn Nets in as many games, 124-118, Tuesday in Milwaukee.

The Bucks (41-24) dominated the interior with advantages of 44-30 scoring in the paint, 62-50 rebounding and 20-9 on second-chance points. Coupled with an overwhelming defensive effort in the fourth quarter, Milwaukee completed the two-game sweep to gain ground in the Eastern Conference chase with Brooklyn (43-23).

With the win, Milwaukee moved to 1.5 games behind Brooklyn for the No. 2 seed in the East.

After falling behind by six, its largest deficit of the night, Milwaukee scored seven straight points with a pair of Donte DiVincenzo baskets from point-blank range book-ending a Bryn Forbes 3-pointer.

Forbes made 4-of-7 3-pointers and finished with 14 points. DiVincenzo scored 10 points and grabbed a career-high 15 rebounds.

Those seven points were part of a 22-5 Bucks run that proved decisive. Brooklyn endured a field-goal drought of 4:37 after Mike James’ 3-pointer with 10 minutes to go put the Nets ahead, 103-97.

James, who Brooklyn signed to a second 10-day contract on Monday, came off the bench for 10 points and three assists.

Brooklyn ended the first half in a manner similar to its fourth quarter, being outscored 22-10 over the final 6:56 of the second period. The Nets whittled down the deficit in the third quarter behind Kyrie Irving and Kevin Durant.

Irving scored a game-high 38 points, which included 6-of-12 shooting from 3-point range.

Durant went 4-of-8 from outside and finished with 32 points to move past Charles Barkley to move to No. 26 on the NBA’s all-time scoring list.

Along with Joe Harris, who made one of his 4-of-8 3-pointers to pull Brooklyn within five points, Irving and Durant led a late-game charge. Irving made a pair of free throws to cut the gap to four points, but Jrue Holiday forced a turnover from Irving in the final minute that sealed the win for Milwaukee.

Brooklyn shot 20-of-43 from 3-point range to Milwaukee’s 14-of-37, but it was not enough to overcome the Bucks’ advantage inside.

Holiday, who went 4-of-6 from beyond the 3-point arc for the Bucks, finished with 23 points and approached a triple-double with 10 assists and eight rebounds. Khris Middleton added 23 points.