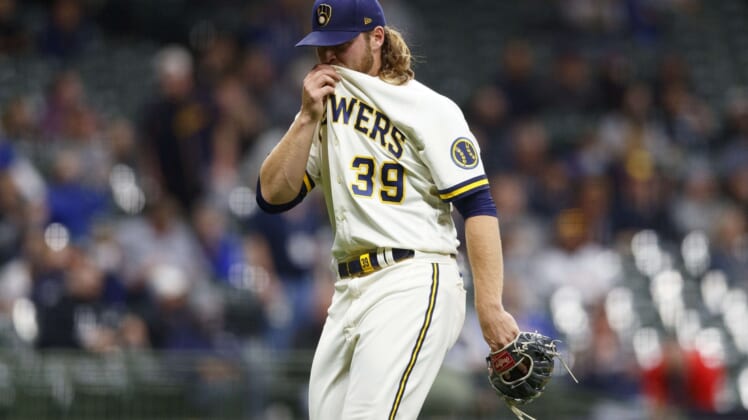 The Milwaukee Brewers placed a pair of starting pitchers on the injured list Thursday, with right-handers Corbin Burnes and Zack Godley going on the shelf.

The club declined to give a reason for Burnes’ IL stint, with the silence suggesting that it could be COVID-19 related. The Milwaukee Journal-Sentinel offered a speculative report that it was “a positive COVID test.”

Godley will miss time with a right index finger contusion that appeared to happen in his Brewers debut Wednesday while attempting to bunt.

The record for strikeouts before issuing the first walk of a season is 51 set by Los Angeles Dodgers right-hander Kenley Jansen in 2017.

Godley gave up four runs (three earned) over three innings in Wednesday’s 6-2 loss to the Mariners. Signed by the club to a minor league deal this past offseason, Godley was filling a rotation void left after a hamstring strain to left-hander Brett Anderson.

Bettinger, who is on a major league roster for the first time, was a 10th-round draft pick by the Brewers in 2017. Lauer, who has not made an appearance for the Brewers this season, is 14-19 with a 4.75 ERA over three seasons with the San Diego Padres and Brewers.

Lauer will start against the Dodgers on Thursday in the opener of a four-game series at Milwaukee.