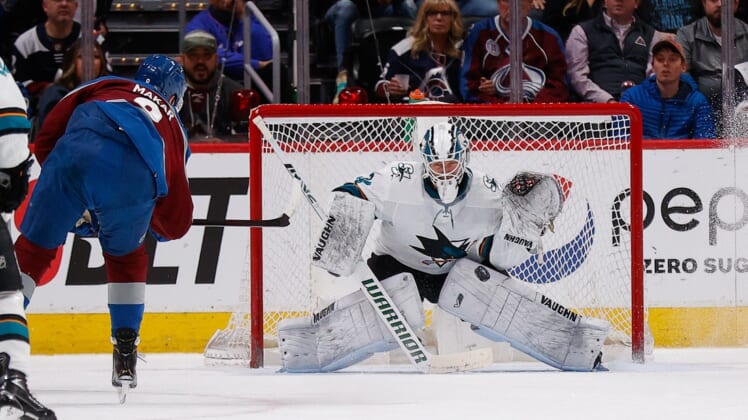 Nazem Kadri and Erik Johnson had two assists each and Pavel Francouz made 25 saves for the Avalanche, who got Nathan MacKinnon back after missing a game with an upper-body injury.

After a scoreless first period, both teams got on the board in the second. Newhook gave Colorado the lead when he got a pass from Johnson in the slot and beat Kahkonen with a screened shot at 1:54. It was his 12th of the season.

The Sharks tied it up later in the period when Hertl skated in on Francouz and, as he was falling forward, sent a pass to Meier on the other side of the net. Meier roofed a shot into the open net to make it 1-1 at 12:09.

It was Meier’s 31st of the season.

It stayed tied into the third period when Colorado took advantage of a turnover. Valeri Nichushkin stole a clearing pass with his glove in the San Jose end and passed across the slot to Helm, who beat Kahkonen for his sixth goal of the season at 3:05.

The Sharks answered again when Burns’ shot from the point got through traffic and by Francouz at 6:29 of the third. It was Burns’ eighth of the year.

The Avalanche broke the tie on the power play nearly six minutes later. Kadri, who briefly went to the dressing room after a hard check in the corner, sent a pass to Rantanen on the right side of the net, and he beat Kahkonen at 12:17. It was his 34th of the season.

Burakovsky sealed it three minutes later with his 19th goal of the season at 15:16.