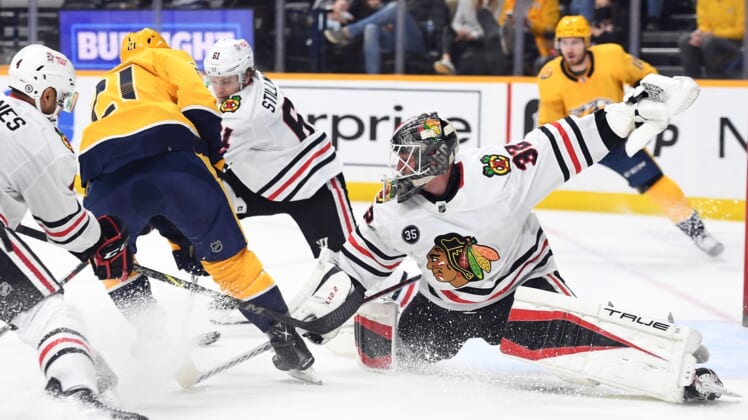 Mikael Granlund had a goal and an assist, including the game-winner early in the third period, and Filip Forsberg had two assists to boost the host Nashville Predators to a 4-3 win over the Chicago Blackhawks on Saturday afternoon.

The Predators scored three consecutive goals after 2-1 early in the second period. Granlund’s goal at 3:14 of the third period made it 4-2 and stood up as the winner when Chicago’s Riley Stillman accounted for the final margin with a goal at 14:31 of the period.

Patrick Kane had a goal and assist for Chicago while playing in his 1,100th career NHL game. Alex DeBrincat added two assists.

Aiming to win consecutive games for the first time since March 23-24, Chicago took a 2-1 lead at 5:15 of the second period as Dominik Kubalik beat Saaros after gathering a crisp pass to the back post from Jake McCabe.

Rookie Lukas Reichel notched the secondary assist for his first career NHL point. Kubalik returned to the lineup Saturday after being a healthy scratch for the past three games.

The tally kicked off an eventful stretch. Eighteen seconds later, the Blackhawks found themselves down a forward, as referees whistled Boris Katchouk for a 10-minute game misconduct following a scrum in front of the Predators’ net.

The teams played 4-on-4 once the dust settled, and the Predators tied the game on a Roman Josi goal at 5:58.

Nashville grabbed the advantage for good with 26 seconds remaining in the period, when Matt Duchene buried a power-play chance in front of the net for his 39th goal.

Nashville won the season series against Chicago 3-0-1 to extend its run of dominance against its Central Division foe. The Predators improved to 11-0-3 in the past 14 meetings with the Blackhawks.

Chicago finished 0 for 4 on the power play.