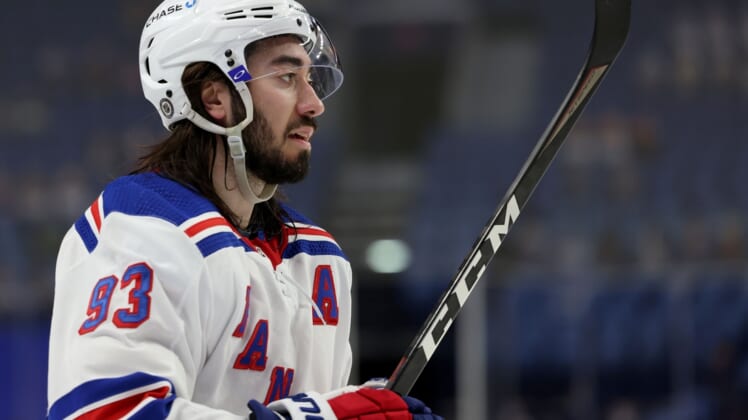 Zibanejad entered the Sabres zone 2-on-1 and passed across to Artemi Panarin, who sent the puck back across to Zibanejad for a one-timer from the left circle.

Buffalo’s Tage Thompson forced overtime with 3.6 seconds left in regulation on a wrist shot from the left circle with the extra attacker on.

Colin Blackwell and Filip Chytil also scored for the Rangers, who have won two straight after dropping a pair. Igor Shesterkin made 21 saves.

Rasmus Asplund also scored for Buffalo, which lost one night after ending its 18-game winless streak (0-15-3). Dustin Tokarski made 44 saves.

Chytil gave the Rangers a 2-1 lead at 6:17 of the third period. During a scrum in front of the net, Julien Gauthier pushed the puck to Chytil, who scored on a wrist shot from the slot.

The Rangers outshot the Sabres 36-10 in the second and third periods.

Asplund, who had missed the past four games because of a lower-body injury, gave the Sabres a 1-0 lead at 2:06 of the first period when he jammed the puck home during a scramble in front.

Blackwell’s ninth goal of the season tied the score 1-1 at 6:40 of the second period. Blackwell hit the crossbar during a two-on-one rush, but Ryan Strome got the rebound and passed cross ice to Blackwell, who scored on a one-timer from the left circle.