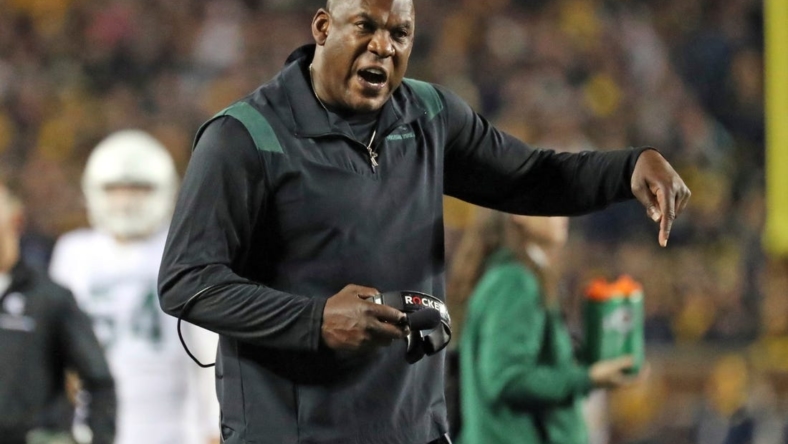 Michigan State suspended four players involved in the tunnel altercation with a Michigan player Saturday night after the Wolverines’ victory over the Spartans in Ann Arbor, Mich.

The four players will remain suspended until all investigations have been completed. Tucker said more players might be suspended as more is uncovered about the incident.

“We are currently working with law enforcement, Michigan State and Michigan campus leadership, and the Big Ten Conference to further evaluate the events in Ann Arbor, including but not limited to, additional student-athlete participation in the altercations and contributing factors,” Tucker said in a statement released Sunday night.

“You have my promise that we are committed to fairness, transparency and accountability, and that we will continue to take appropriate action in this matter. Our core values and the responsibility that comes with wearing the State green and white jersey must never be compromised,” Tucker’s statement went on.

Fourth-ranked Michigan defeated Michigan State 29-7, and after the game, video captured a group of Spartans players punching and kicking Wolverines defensive back Ja’Den McBurrows in the tunnel heading toward the locker room. Tempers had flared near the end of the game.

“On behalf of our university and athletics department, I have been in consistent contact with University of Michigan Athletics Director Warde Manuel and Big Ten Conference Commissioner Kevin Warren,” Michigan State vice president Alan Haller said in Sunday’s statement. “In addition to members of our Spartan family to offer our apologies and to ensure our collaboration with law enforcement as they conduct investigations into the matter.”

Michigan coach Jim Harbaugh was visibly shaken after the game and called the incident an assault on two players, though the second player was not identified. Harbaugh said one of the players could have sustained an injury to his nose.

“Just like anybody, you want to protect your players,” Harbaugh said Saturday night. “Ten on one, whatever it was, it was just bad. It needs to be investigated and brought to a conclusion. Our athletic director will make sure that that takes place.”