Michael Jordan signed a one-year $33 million contract with the Chicago Bulls prior to the start of the 1997-1998 season. It was the last contract he would sign with the team. It also still represents the largest single-season contract in NBA history.

Want Michael Jordan's $33M contract? Hopefully it won't cost you that much at auction.http://t.co/2yUOINmWtr pic.twitter.com/UReZzcEkDf

The original contract has now been put up for auction by the Dallas-based Heritage Auctions. Initial reports indicated that the value of said contract, which obviously has Jordan’s signature on it, was $30,000.

But as ESPN reports, bidding is already up to $28,000 with one week remaining in the auction. 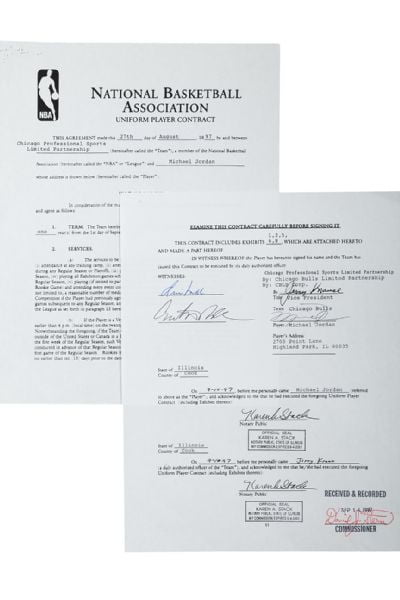 Jordan went on to lead the Bulls to a 62-20 record and a sixth NBA championship that season. To put Jordan’s $33 million contract into perspective, the highest-paid NBA player this past season was Kobe Bryant at just over $30 million. Taking into account inflation, Jordan’s contract would be valued at over $55 million today.

How much are you willing to pay for this amazing piece of history?