Miami Heat front office had Pat Riley is doing everything possible to find another star this summer after their loss to the Boston Celtics in the Eastern Conference Finals.

Most recently, Miami has been linked to Brooklyn Nets superstar Kevin Durant after he requested a trade late last week. Miami is said to be one of his preferred landing spots, joining the Phoenix Suns in that exclusive club.

Without a ton of young stars to offer up Brooklyn, the Heat are working from a disadvanatage. Though, Riley has continually pulled off blockbuster moves of this ilk since transitoning from the bench to the front office eons ago.

With all of that said, the inclusion of Kyle Lowry could prove to be valuable in any potential trade for Durant.

From a pure logistical standpoint, Miami can’t trade star center Bam Adebayo to the Nets in any two-team deal due to Ben Simmons’ presence on Brooklyn’s roster. NBA rules prohibit a team trading for a player on a rookie-level max contract if it already has a player of that ilk on the roster. That applies to both Adebayo and Simmons.

It was noted recently that KD wants to play with Adebayo, Jimmy Butler and Lowry. That can’t happen under NBA salary cap rules. One of those three would have to be involved. Given that Brooklyn is looking for “rebuilding pieces” in any KD trade, Butler wouldn’t head to the Big Apple. Heck, the Heat wouldn’t want to move him in the first place.

Short of finding a third team to take on Adebayo (a possibility), Lowry would have to be involved in any deal that brings Durant to South Beach. 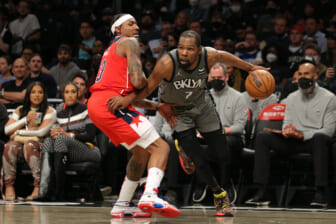 There’s also some issues when it comes to his involvement. Lowry, 36, has two more years and $58-plus million remaining on his current contract. He regressed in his first season with the Heat. Brooklyn is looking to rebuild. In short, he wouldn’t be a net-positive trade asset in a two-team swap.

Rather, the Miami Heat would either have to get a third team involved or add even more heading back to Brooklyn in what could be one of the largest blockbuster NBA trades in modern history.

“For the Nets, a potential deal for Durant comes down to how much the team can salvage in terms of young players and draft picks as it looks to move forward after the disaster that the past three seasons have turned out to be.”

How a Kevin Durant trade to the Miami Heat might look

Just recently, it was reported that the Golden State Warriors had interst in re-acquiring Durant. In said report, the likes of Jordan Poole, Jonathan Kuminga, James Wiseman, Andrew Wiggins and multiple first-round picks were mentioned as a package heading back to Brooklyn.

While it remains highly unlikely that KD returns to the Bay Area, this gives us some idea about what it might take to acquire the two-time NBA Finals MVP. An historic haul. Under that guise, this is how a KD trade to the Heat might look.