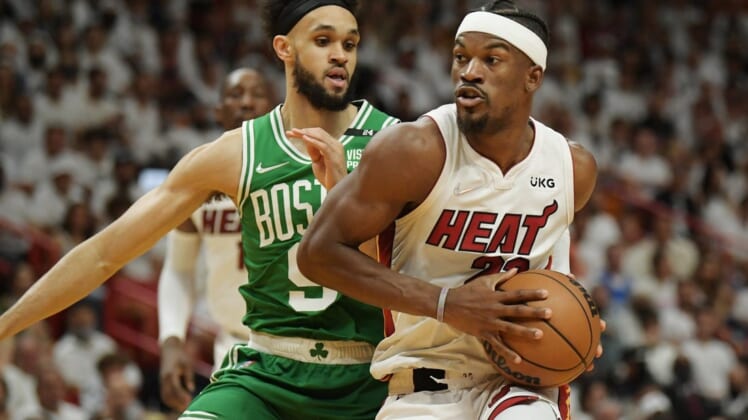 Jayson Tatum registered 26 points, 10 rebounds and six assists to help the Boston Celtics notch a 100-96 victory over the host Miami Heat to win Game 7 of the Eastern Conference finals on Sunday night and reach the NBA Finals.

Marcus Smart added 24 points and nine rebounds and Jaylen Brown also scored 24 points as the Celtics advanced to the NBA Finals for the first time since 2010. Grant Williams added 11 points for Boston.

Butler missed a three-point attempt with 16.6 seconds left that would have given Miami the lead.

The Celtics will face the Golden State Warriors in the NBA Finals. Game 1 is Thursday night in San Francisco.

Boston led wire-to-wire in ending a streak of five straight losses in opportunities to clinch an NBA Finals berth.

The Heat, which trailed by 17 early in the second quarter and by 16 late in the second, pulled within 82-79 after Adebayo and Butler opened the fourth quarter with baskets.

But Boston countered with eight straight points, with Smart’s floater making it an 11-point cushion with 6:36 left.

Lowry’s layup with one minute left pulled the Heat within 98-93, and Strus followed with a 3-pointer to cut it two with 50.7 seconds left.

Miami had a chance to move ahead, but Butler’s ill-fated 3-pointer bounced off the rim, and Smart made two free throws with 11.4 seconds left to give Boston the game-ending four-point lead.

Miami’s Tyler Herro (groin) returned from a three-game absence and was scoreless in seven minutes.

The Heat made 42 percent of their shots and were a shaky 6 of 30 from behind the arc.

Brown scored 15 and Tatum added 13 as the Celtics held a 55-49 halftime lead. Butler scored 24 in the half for Miami.

Boston sprinted out of the gates with leads of 12-3 and 24-9. After the Heat awoke with eight straight points, the Celtics finished the quarter with eight of their own to take a 32-17 lead into the second quarter.

Brown’s basket to start the second gave Boston a 17-point lead, and the advantage was 53-38 after Tatum connected on a 3-pointer with 2:36 left. But Miami finished strong with an 11-2 burst to trail by six at the break.

The Celtics pushed the lead to 72-58 on Smart’s 3-pointer with 6:46 left in the third quarter. Miami again cut down its deficit and trailed 82-75 entering the final stanza.