Last season was rough on the Miami Heat, coming off a year in which they made a Cinderella NBA Finals run in the Bubble before falling short to the Los Angeles Lakers. They started off the year with lofty expectations of being a serious contender, but were unable to live up to the hype.

COVID-19 restrictions and injuries caused the Heat to finish an underwhelming 40-32 finishing sixth in the Eastern Conference. In the playoffs, they were swept in the first round by the eventual NBA champion Milwaukee Bucks.

In an effort to rectify what was a disappointing season, the Miami Heat put together a fantastic free agency so much so that they could conceivably be seen as one of the favorites in the Eastern Conference.

Their notable moves include acquiring Kyle Lowry in a sign-and-trade, signing P.J. Tucker from the NBA champion Milwaukee Bucks and Markieff Morris, who was a member of the 2020 NBA champion Los Angeles Lakers.

In addition to this, the Heat were able to re-sign rising star Duncan Robinson and Victor Oladipo. Adding these new additions to a team that already included Jimmy Butler, Bam Adebayo, and Tyler Herro, the Heat have a recipe for what could be a second NBA Finals appearance in three years.

Here are three reasons why the Miami Heat can win the Eastern Conference next season.

Miami Heat are the best defensive team in the NBA

The Heat arguably have the best mix of defensive talent the NBA has to offer. Led by Jimmy Butler who might be the best perimeter defender in the NBA, his backup Victor Oladipo is a former steals leader and All-NBA Defensive Team performer. While Kyle Lowry has never made an All-Defensive team, he is very crafty and able to take charges and frustrate his opponent on the defensive end. Tucker was a great offseason add, too.

In the middle, Bam Adebayo has made two All-Defensive teams in his four seasons in the NBA, most notably showcasing his skills in the Heat’s 2020 NBA playoff run that saw them make the NBA Finals for the first time in six years. This team if filled with versatile defenders able to guard a multitude of positions at any point in the game. If they are able to establish a chemistry early, they could easily be considered the best defensive team in the NBA next season.

Not only is the Miami Heat’s roster filled with very good defensive players, but they also have some very good offensive players. While most teams seem to rely on the three-point shot too much, the Heat do not have that problem as they will have a team that is very versatile on offense. In addition to possibly being the best defender in the league, Jimmy Butler is also one of the most crafty scorers the NBA has to offer as well. Butler is a true throwback, able to score from mid-range and by drawing contact getting to the free throw line.

Where do the Miami Heat sit in our latest NBA power rankings?

Not only that but Butler also has the ability to initiate offense as the primary ball handler. With the addition of Kyle Lowry, the Heat now have another elite playmaker able to run the offense for the team. While the Heat do not depend on the three-point shot, they have two of the best shooters in the NBA in Duncan Robinson and Tyler Herro. Even veteran additions P.J. Tucker and Markieff Morris have proven to be solid three-point shooters when called upon. While Victor Oladipo may not as good offensively as he once was, he is still a reliable scorer.

The Miami Heat’s competition at the top of the Eastern Conference have some very noticeable flaws that the Heat can exploit on their way to an NBA Finals berth. Many will rightfully have the Brooklyn Nets as a favorite, led by the superstar trio of Kevin Durant, James Harden and Kyrie Irving. However, they each had significant problems with remaining healthy last season that led to Durant missing 37 games in the regular season while Irving and Harden each missed time in the regular season.

The Philadelphia 76ers are currently in the midst of a franchise-altering decision regarding their star point guard Ben Simmons. While the reigning champion Milwaukee Bucks might be the best team built to knock off the Heat, even they may struggle on the defensive end without Tucker. Also, they have previously been criticized for their decision making on both ends of the floor. 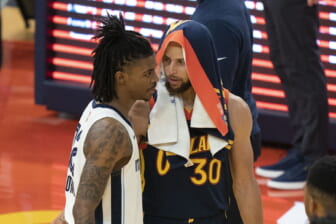 The Miami Heat have a great mix of young stars and veteran stars that have each proven to be reliable in big games. They arguably have the most depth of any team in the Eastern Conference from top to bottom. Like the teams mentioned, however, they also have some flaws that they will have to work through.

Outside of Bam Adebayo, they do not have a true threat in the middle. They lost Kendrick Nunn and Trevor Ariza — two of their key pieces from their 2020 NBA Finals team to free agency and they have had their own problems with injuries. With that being said, the Heat have one of the most consistent rosters in the East and arguably the best coach in the NBA in Erik Spoelstra.

They are surely capable of being the team that wins the Eastern Conference and make their second NBA Finals in three years.