The Miami Heat are currently on a six-game winning streak, however, the team shouldn't be blind to the issues. Here are 3 trades to fix the issues on the team. 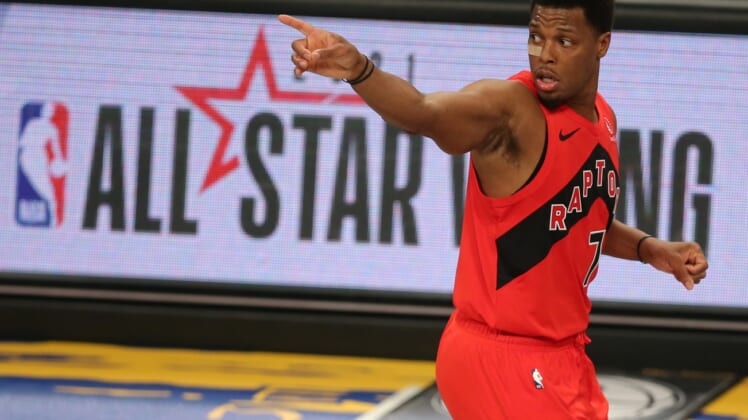 The Miami Heat have been on a roll lately as they hold the NBA’s longest win streak at six games. During that stretch, they beat teams such as the Los Angeles Lakers, Utah Jazz, and Toronto Raptors. The Jazz and Lakers are the top two teams in a heavy-loaded Western Conference.

They have shown flashes of returning to their old selves during these games and look to extend that streak Tuesday night against the Atlanta Hawks. Jimmy Butler returning from his COVID-19 absence has done wonders for Miami and Goran Dragic coming back from his ankle injury has helped the team’s bench performance.

While the Heat are playing good basketball right now, their recent hot stretch shouldn’t blind the team from its issues. Here are three trades that could fix the team’s remaining issues that could propel them to the top-tier of contenders in the Eastern Conference.

The Miami Heat trading for San Antonio Spurs forward Rudy Gay would be the best realistic option for the team. While Kelly Olynyk has actually played well since Jimmy Butler’s return, the Heat didn’t plan for him to be starting this season and could look at a better option for the four position.

The Heat have shown interest in Gay and are doing their due diligence when it comes to making a move to sure up the rotation. Gay is averaging 11.2 points, 5.2 rebounds, and 1.5 assists in 22.0 minutes per game this season.

Gay has been out for three games due to COVID-19 health and safety protocols, with the hope that he could return for one of the two games before the All-Star break. Before he was deemed ineligible to play, the 34-year-old forward was having a tremendous 2020-2021 season.

Rudy Gay has an expiring contract with a $14.0 million salary for the rest of the 2021 season. Kelly Olynyk has a $12 million salary, which would match up extremely well with Gay. This would be ideal for Miami as they could add someone like KZ Okpala and a 2022 second-round pick so it would possibly be good enough to make the deal.

Gay could be inserted into the open spot at the four and start for the team down the stretch in a similar role Jae Crowder played last season. Out of every trade the Heat could make, a trade for Gay would most likely be the best route to go.

Kyle Lowry has been linked to the Heat for years now. It was reported that the Heat and Raptors were working on a sign-and-trade in 2015, but it turned out to be false. However, the Raptors could be in the best position to trade Lowry now that they are not in Toronto this season.

The Raptors could trade Lowry because they are in Tampa and the fan reaction wouldn’t be as important if they were in Toronto. They want to “reward” the point guard by sending him to a contender such as the Philadelphia 76ers, Los Angeles Clippers, or Miami Heat.

Lowry is averaging 18.0 points, 5.7 rebounds, and 6.6 assists in 34.3 minutes per game this season. Lowry is 34 years-old while on an expiring contract, which could make this move inevitable, even with the team in playoff contention

Here’s a prospective deal where Miami would acquire Lowry:

Kendrick Nunn has been on fire as of late and could be a nice consolation prize for the Raptors. The other main part of the deal would be the 2025 unprotected first-round pick. Iguodala and Leonard would be cap fillers in the deal since they need to send back significant salaries due to Lowry’s $30 million salary.

This trade would make sense for both teams, since the Heat could make a playoff push with Lowry at starting point guard and the Raptors would gain a young guard and still have a shot to compete. The question could be whether Miami is willing to keep Nunn and if they don’t plan to, it makes a deal easier.

Thaddeus Young would be a good fit on the Miami Heat, who could give the team a more dynamic forward. Young is averaging 11.9 points, 5.9 rebounds, and 4.4 assists in 25.2 minutes per game this season.

A Chicago Bulls insider included the Heat as a potential destination when it came to Young. They mentioned how teams have been interested in Young to bolster their bench in hopes to make an NBA Finals run this season.

The 32-year-old forward would give another scoring option next to Bam Adebayo in the front court and another good rebounder who can pass the ball. Young is a solid veteran option that could even be plugged into the starting lineup in place of Olynyk.

Here’s a scenario in which Young could take his talents to South Beach:

Young is on a similar deal as Heat target Rudy Gay who is earning a $14 million salary on an expiring deal this season. The Heat could include the same players such as Olynyk and Okpala, then include a 2025 lottery protected first-round pick. Young is younger than Gay and could command more than him.

The forward would fit right next to Adebayo, as Miami has been interested in keeping him at the center position. While losing Olynyk would actually be disappointing, they could include Andre Iguodala if they desperately want to keep him. However, I feel like they value Iguodala more than Olynyk.

If the Miami Heat want to truly compete for in 2021 NBA Finals, they will need to make one of these trades or one we do not see coming. They beat the Jazz and Lakers, but the Nets, in my opinion, are the team to beat and they are going to need another player.