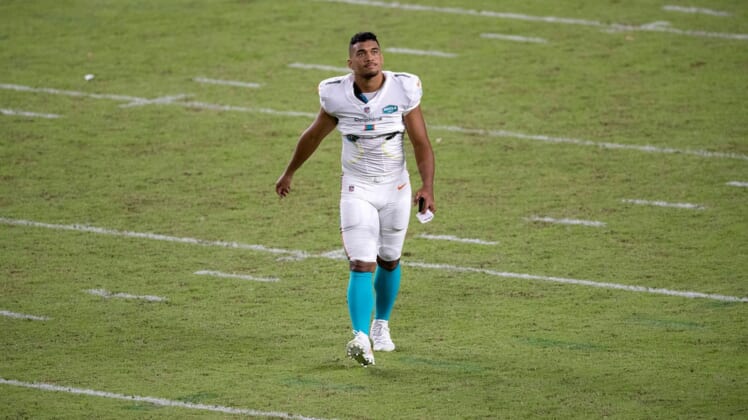 Miami Dolphins quarterback Tua Tagovailoa (1) walks the field after spending some time alone after win against the Jets at Hard Rock Stadium in Miami Gardens, October 18, 2020. Tagovailoa entered the game for his first playing time late in the fourth quarter. (ALLEN EYESTONE / THE PALM BEACH POST)

Talk about something that has come completely out of left field. Ryan Fitzpatrick has led his Miami Dolphins to a 3-3 record heading into their Week 7 bye. He’s playing great football. Despite this, rumors have continued to persist out of South Beach that Tua Tagovailoa would soon be under center.

A top-five pick out of Alabama back in April, Tagovailoa made his NFL debut in mop up duty during a blowout Week 6 win over the New York Jets. There was absolutely no indication before this news broke that the rookie would get the nod over Fitzpatrick for the Dolphins’ next game. It’s obviously some shocking news around the football world.

Fitzpatrick has led Miami to wins in three of its past four games. The Dolphins have outscored their past two opponents, the 49ers and Jets, by a combined margin of 67-17. During that span, Fitzpatrick tallied six touchdowns compared to two interceptions.

One of the most-respected veteran quarterbacks in the NFL, it’s hard to imagine Fitzpatrick putting up too much of a stink when it comes to this. He had to know the writing was on the wall at some point in the near future.

Even then, the abrupt nature of the Dolphins’ decision to start Tagovailoa seems to indicate that this was the plan from the get. Whether Fitzpatrick knew about it behind the scenes remains to be seen.

The veteran has tallied 1,535 yards with 10 touchdowns and seven interceptions en route to leading the Dolphins to a 3-3 record and nearly 27 points per game.

This could have played a role in head coach Brian Flores’ thought process. The Dolphins have a bye in Week 7, meaning that they can give Tagovailoa additional time to take QB1 reps during practice. After that, it’s not necessarily an easy road for the young quarterback.

At the very least, Tagovailoa will now get on the field as a starter in the NFL less than a calendar year after he suffered what initially seemed to be a career-threatening hip injury at Alabama.