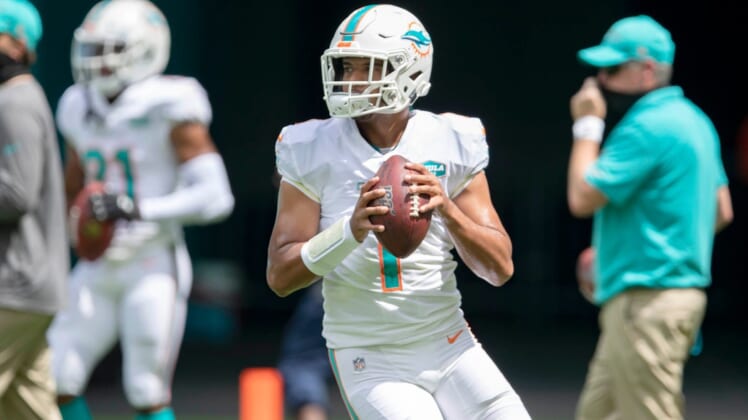 Fresh off a blowout win over the San Francisco 49ers in Week 5, Brian Flores and the Miami Dolphins destroyed the hapless New York Jets on Sunday. Miami shutout its division rival by the score of 24-0 with rookie first-round pick Tua Tagovailoa getting in some garbage-time action.

This represented Tagovailoa’s NFL debut. Ultimately, the former Alabama standout completed each of his two passes for nine yards. He didn’t do anything special. But given just how heralded the former Heisman finalist was coming out of college, it’s still notable. The serious hip injury Tagovailoa suffered with the Crimson Tide last season also played a role here.

Obviously, those watching the Dolphins move to 3-3 on the season had their reactions to Tagovailoa making his NFL debut on Sunday.

It was certainly nice to see Tua get some action in. There were rumors earlier this season that he might take over for Ryan Fitzpatrick under center as a rookie.

Given that the Dolphins are 3-3 and in the midst of winning three of their past four, that’s highly unlikely to happen. At the very least, fans in South Beach got to see their future franchise quarterback take his first snap in the pros. They got to see it within the confines of a game that saw Miami blow out its division rival by 24 points. Not too shabby.