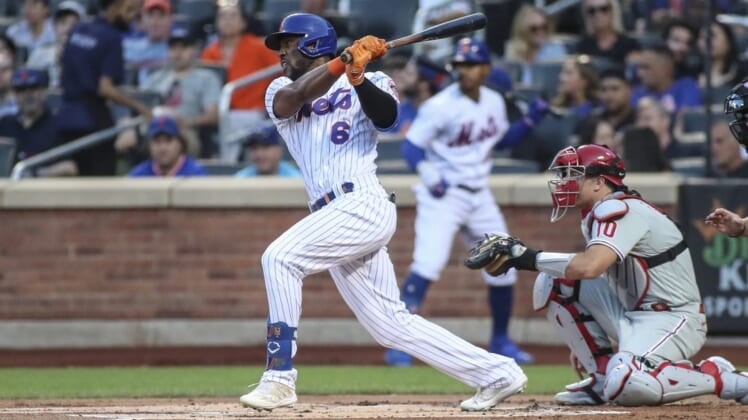 Jacob deGrom outdueled Aaron Nola in an old-fashioned pitcher’s duel Saturday night, striking out 10 over six scoreless innings to earn the win in his third start of the season as the Mets edged the visiting Philadelphia Phillies 1-0.

Pete Alonso’s first-inning RBI single brought home the game’s only run as the Mets won for the 16th time in 19 games. The Phillies have lost two of three since winning seven straight.

deGrom (2-0), who didn’t make his season debut until Aug. 2 due to a shoulder injury, allowed two hits and walked none while throwing 76 pitches, 57 for strikes. He gave up a one-out single in the first to Rhys Hoskins and set down the next 16 batters before giving up a single to the penultimate batter he faced, Bryson Stott.

deGrom, who also missed the second half of last season with elbow woes, has a 1.62 ERA with 28 strikeouts and one walk in 16 2/3 innings.

Seth Lugo gave up a hit in the seventh and Trevor May struck out two in a perfect eighth before Edwin Diaz recorded his 27th save of the season — and 200th of his career save by working around a pair of walks in the ninth. Diaz struck out Nick Castellanos to strand both runners in scoring position.

Nola (8-9) nearly matched deGrom and actually bettered the Mets’ ace by retiring 17 in a row between the second and seventh innings. The right-hander gave up four hits and walked one while striking out eight in an eight-inning complete game.

The Mets took advantage of a throwing error by Phillies catcher J.T. Realmuto to score their run in the first. With one out, Starling Marte singled, and he and stole second as Francisco Lindor struck out looking. Marte went to third when Realmuto’s throw skipped into center field and he scored on Alonso’s single to right.

Luis Guillorme and Jeff McNeil had the Mets’ other hits, back-to-back singles with one out in the second.