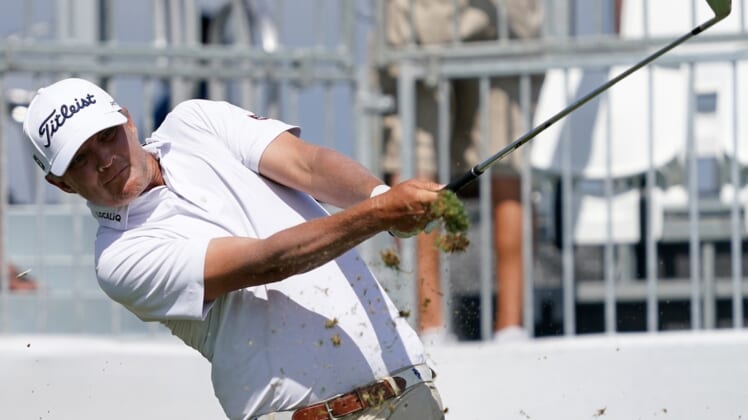 Australia’s Matt Jones birdied his final three holes to tie the PGA National course record with a 9-under 61 on Thursday to seize a three-stroke lead at the Honda Classic in Palm Beach Gardens, Fla.

Jones, who turns 41 next month, entered the week ranked 83rd in the official world golf rankings. Taking advantage of relatively calm winds during the morning wave despite a windy day overall, he carded a bogey-free round to claim just his second solo lead after the first round in a PGA Tour event.

“I don’t know if you ever know it’s special,” Jones said of his round. “I was just managing the golf course and hitting good shots.”

Aaron Wise and Russell Henley both carded 6-under 64s during the morning wave.

Wise highlighted his day by carding three straight birdies. His 64 on Thursday marked his lowest score on the PGA Tour since the 2020 Mayakoba Golf Classic.

“You know, I felt like I played amazing today. The first few holes were pretty easy because there was no wind, but once we made the turn and got to the back nine, it was playing incredibly hard,” Wise said. “For Matt to shoot 9-under, that’s an amazing round, but I felt like I played one, too, and there’s still some more golf left, so hopefully I can keep going in this tournament.”

Henley’s total was his lowest 18-hole score in the event since opening with a 64 en route to winning the Honda Classic in 2014.

Kevin Chappell, Scott Harrington, Steve Stricker, Joseph Bramlett and Australian Cameron Davis were another two shots off the pace at 4 under.

Thursday’s 61 was the lowest score in Jones’ 14 years on the PGA Tour. And he accomplished it on one of the Tour’s most difficult courses, tying Brian Harman’s 61 in the second round in 2012.

While he doesn’t have a stellar track record at PGA National, Jones’ tie for fourth at the Honda Classic in 2008 was one of his best career finishes.

“I don’t know why I always feel comfortable on this golf course,” he said. “There’s so many uncomfortable golf holes out there. But it is a course I do like playing, and if I’m hitting it the way I am today the rest of the week, it’ll be a good week.

Defending champion Sungjae Im opened with a 2-under 68 on Thursday. He is bidding to join Jack Nicklaus (1977-78) as players to successfully defend their title in the event.

Phil Mickelson shot a 1-over 71 on Thursday while fighting a wayward driver. The 50-year-old creeped back into the top 100 at No. 99 following a T35 at The Players.

NOTES: Daniel Berger, the top-ranked player in the field at No. 15, withdrew Wednesday due to a rib injury. That left defending champion Sungjae Im (No. 18) as the top-ranked player at the start of the event. … PGA National features the stretch from Nos. 15-17 known as the “Bear Trap,” the fourth-hardest three-hole stretch on the Tour since 2007. It was named after Jack Nicklaus, who re-imagined the course originally designed by Tom and George Fazio. … Im’s 6-under par score was tied for the second highest to win at the Honda Classic since it moved to PGA National in 2007 and the highest on Tour in a non-major since the 2016 Farmers Insurance Open. Last year’s event was the first non-major on Tour since 1996 without any players posting a score of 5-under or better in any single round. … Former U.S. Open champion Gary Woodland, Scott Piercy and Doc Redman withdrew following positive COVID-19 tests.