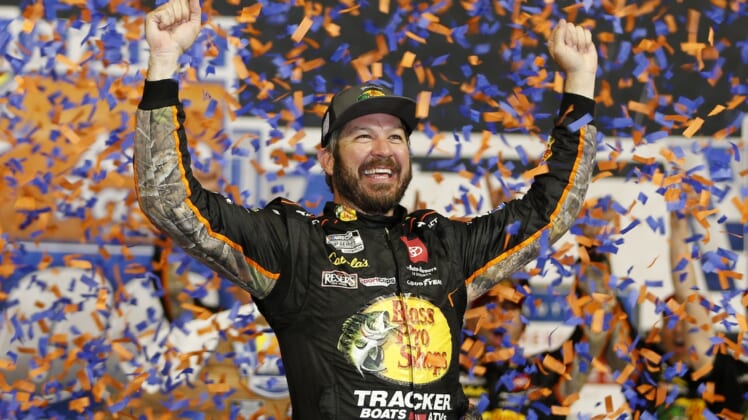 The victory in the second race of the Round of 16 in the Playoffs was Truex’s fourth of the season and secured him a berth in the Round of 12, which begins in two weeks.

Truex took the lead with 50 laps to go. From there his task was to stay out of trouble, avoid lapped traffic in order to protect an eight-second lead over Joe Gibbs Racing teammate Denny Hamlin.

Hamlin made it interesting but Truex, who swept both 2019 races at the .75-mile Richmond oval, finished 1.4 seconds ahead of Hamlin.

Virginia native Hamlin, who won a week ago at Darlington to secure his place in the Round of 12, led a race-best 197 laps.

Chase Elliott, who also crashed out at Darlington, overcame a terrible pit stop about 183 laps into the 400-lapper, to finish fourth.

Kyle Busch of JGR, who crashed out a week ago and was the fined $50,000 for “actions detrimental to stock car racing” in the aftermath of that wreck, was leading with 55 laps to go. But on his final green-flag stop, he was penalized for speeding and fell back to 10th — the final spot on the led lap. He wound up ninth.

Kyle Larson didn’t get his sixth victory of the season but was able to secure a berth in the Round of 12 by way of points. He finished sixth.

Kurt Busch of Chip Ganassi Racing was the first Playoff driver to run into major trouble as he blew a tire and slammed the outside wall hard on Lap 41. Four laps earlier he had restarted the race after a competition with the lead. Busch had finished sixth in the Playoffs opener at Darlington the week before.

The series moves to Bristol Motor Speedway next Saturday night for the final race of the Playoffs opening Round of 16.