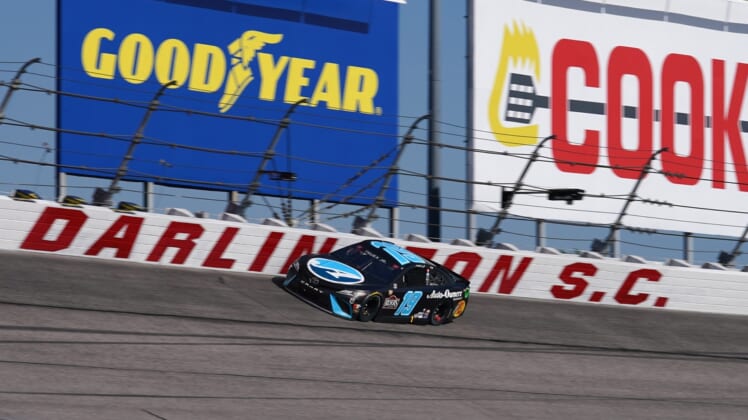 Martin Truex Jr. won for the third time in the 2021 season Sunday when he captured the Goodyear 400 NASCAR Cup Series race at Darlington Raceway in South Carolina.

And a dominating win it was for the Joe Gibbs Racing driver as he led 248 of 293 laps. At times, his margin over the closest driver behind him was more than 10 seconds — or a third of a lap at the 1.33-mile egg-shaped oval.

Truex’s other wins this year were at Phoenix and Martinsville. No other driver has won more than once in 2021.

The victory was Truex’s second at Darlington but it didn’t come without a late-race challenge as Kyle Larson of Hendrick Motorsports hunted him down over the final 30 laps, made his way to Truex’s rear bumper and stayed there until fading with five laps to go.

Truex’s margin of victory over Larson was 2.51 seconds.

Kyle Busch, who won a week ago at Kansas, had the lead just before blowing a tire and spinning on Lap 22. But he came back from that and finished third.

Stewart-Haas Racing’s Kevin Harvick won two of the three Darlington races last year and finished third in the other. But all those races were run in cars with more downforce and 200 less horsepower — 550 vs. 750. Harvick finished sixth.

Both Hendricks’ Chase Elliott and Stewart-Haas Racing’s Aric Almirola were forced to start from the rear of the field. Elliott for unapproved adjustments to his car and Almirola for twice failing pre-race inspection.

Almirola’s day ended when he was tapped from behind and slammed into the inside wall.

Elliott, on the other hand, advanced to the top 10 well before the end of the first 90-lap stage. The defending series champ finished seventh.

Next up on the schedule is a race at Dover International Speedway’ Monster Mile in Delaware.