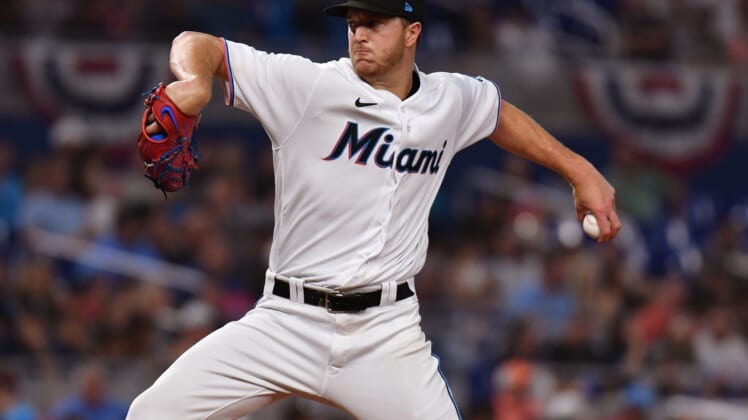 The visiting Miami Marlins will look to complete a three-game sweep when they face the Washington Nationals on Thursday.

Miami, which opened the season 1-4, won its fourth straight game on Wednesday to climb above .500 for the first time in 2022.

Rogers, 24, hopes to build on his last outing, when he gave up one unearned run on four hits over five innings but took a loss against the Atlanta Braves on Friday. It was a strong bounce-back after he was roughed up for seven runs in 1 2/3 innings during an April 16 start against the Philadelphia Phillies.

Bouncing back will be Corbin’s goal against the Marlins. Last time out, he allowed seven runs on seven hits and three walks while recording just five outs in a loss to the San Francisco Giants on Friday. Last season, Corbin finished 9-16 with a 5.82 ERA, and this season has been a continuation of those struggles.

“Just putting too many guys on base, not making pitches, not getting ahead of guys and staying on the attack,” Corbin said. “It’s obviously been frustrating. I’m just trying to do everything I can to talk to whoever, try to figure out how to get better.”

Corbin is 5-5 with 4.29 ERA and one shutout in 15 career starts against the Marlins.

On Wednesday, Miami’s offense consisted of a Jesus Aguilar homer and a bases-loaded walk to Jorge Soler, but that was enough for Pablo Lopez and the bullpen in a 2-1 win against the slumping Nationals.

Lopez continued his strong start with six shutout innings, lowering his ERA to a majors-best 0.39, and Anthony Bender got the final four outs for his fourth save.

The Nationals, who have scored 14 runs during a seven-game losing streak, loaded the bases with two outs in the eighth and got a walk from Nelson Cruz to cut the deficit to one. However, the ballpark then held in Yadiel Hernandez’s deep fly to center field, ending the inning.

The only good news for Washington on Wednesday occurred in West Palm Beach, Fla., where right-handers Stephen Strasburg and Joe Ross, two-fifths of the Nationals’ optimum rotation, progressed in their recovery from thoracic outlet surgery and elbow surgery, respectively.

Each threw a bullpen session off a mound and is ready to face live hitters.

“Both felt good after they threw,” Washignton manager Dave Martinez said. “The next plan will be again to get them out there and to say they’re going to face live hitters. We’ll see how that goes.”