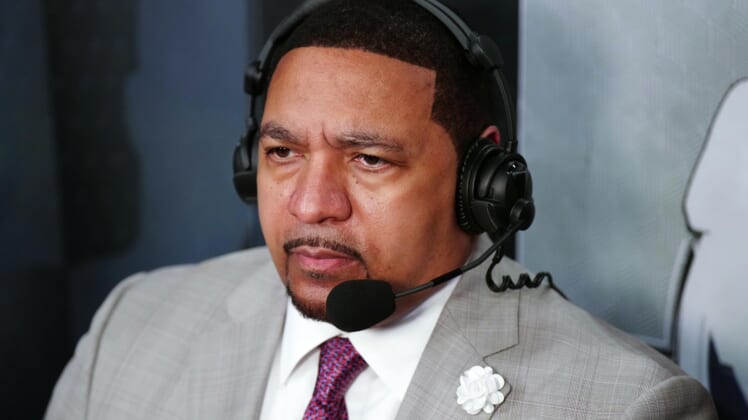 It’s been 16 consecutive years of missing the playoffs for the Sacramento Kings. In that time, they’ve had 12 head coaches, whether permanent or on an interim basis. After parting ways with Luke Walton and Alvin Gentry after another fruitless season, the Kings are back at it, searching for a new head coach. Earlier reports linked the Kings to three candidates — Mark Jackson, Steve Clifford, and Mike Brown, but now a frontrunner may be emerging from the pack in Sacramento.

According to Jake Fischer of Bleacher Report, league sources have suggested Jackson has indeed pulled himself made his way to the top of the throne, with Kings owner Vivek Ranadive putting his support behind the former Golden State Warriors coach.

Ranadive and Jackson, who are familiar with one another from when Ranadive was co-owner and vice chairman of the Warriors when Jackson was coaching, might prefer to turn to an old friend as opposed to an outside voice such as Brown or Clifford, two other veteran options.

Fischer adds that Ranadive suggested Jackson should have been hired on as the associate head coach in 2020, a position that eventually went to Gentry. Now, two years later Ranadive could be looking to make good on his earlier intentions by bringing Jackson on as the head coach instead. But is he overlooking the other candidates and what they bring to the table, or is Jackson exactly what they’re looking for?

Ultimately it could come down to what general manager Monte McNair wants. As Ranadive has suggested, McNair holds the keys to the castle, with the full power to hire and fire head coaches, which is what drove the decision to fire Walton after a 6-11 start.

McNair may feel differently than Ranadive and could prefer a candidate of his own, like coach Mike Brown who worked with Wes Wilcox, the assistant GM in Sactown during their days with the Cleveland Cavaliers.

Still, Ranadive will be consulted throughout the process and could be growing tired of the same old dysfunction, which might lead to Jackson getting hired in the end.

It’s true. Mark Jackson did help spark the turnaround of the Warriors, taking them from a 23-win squad in 2011-12, and ending with a 51-win team just two years later before getting fired, clearing the way for Steve Kerr to win the NBA Finals the very next year.

Some might suggest Jackson did the heavy lifting in the Bay Area, helping teach the young stars how to play winning basketball, while Kerr made things more efficient on both ends of the floor.

Sure Jackson isn’t the one who received credit for helping turn around the Warriors, but he did still oversee a 24-win improvement from the 2011-12 season to 2012-13, shouldn’t that count for something?

The Kings on the other hand would love to experience even a sliver of the same success. Plus, the Kings aren’t even as bad of a team as Jackson’s Warriors were when he initially took the gig. Maybe he actually can help teach the young Kings how to play winning basketball, even if it’s not the same brand we saw with the Warriors.

Based on previous ties, his winning experience, and his obvious passion for basketball, it’s not ridiculous to think Jackson can do a decent chance if given another opportunity to coach an NBA team. It could even help the Kings end their 16-year playoff drought, which would have to be considered a major victory for both Jackson and the city of Sacramento.