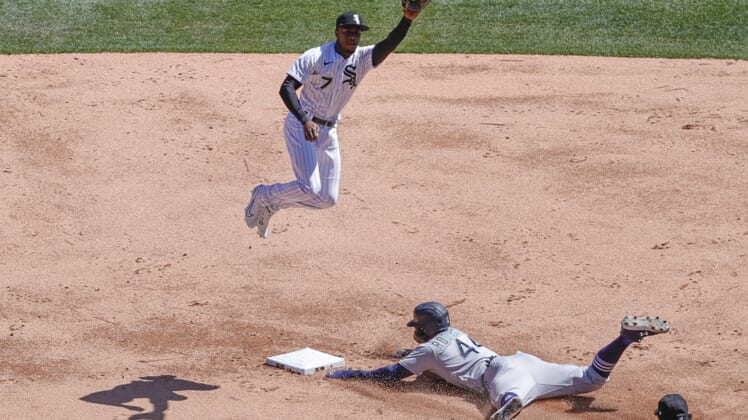 In a duel between teams on contrasting streaks, the Mariners ended their four-game skid and Chicago’s four-game winning streak with a power-packed attack after having hit just five homers in their first six games.

Kelenic belted his first of the season in the second inning off Jimmy Lambert (0-1), who had been promoted from Triple-A Charlotte to take the rotation spot of injured Lucas Giolito.

Making his first big-league appearance of the young season, Lambert had walked Eugenio Suarez with two outs in the second to set the stage for Kelenic’s two-run blast.

The Mariners never trailed, although the White Sox threatened to draw even in the fifth when an error by Raleigh, the catcher, and two singles made it 2-1 and put the potential tying run in scoring position. Jake Burger collected the RBI.

But Gilbert (1-0) escaped further damage by striking out Luis Robert.

The right-hander was pulled at inning’s end, having allowed just the one unearned run on four hits. He struck out four and walked none.

While relievers Andres Munoz, Drew Steckenrider and Diego Castillo were silencing the White Sox with an inning apiece of hitless ball, the Mariners edged away when Raleigh smacked a solo shot in the seventh and Haniger hit a two-run homer in the eighth after Jesse Winker had drawn an inning-opening walk.

It was Raleigh’s first home run of the season and the third for Haniger.

Protecting a four-run lead, Paul Sewald threw a 1-2-3 ninth in a non-save situation.

Lambert pitched just the first three innings for the White Sox, who had won four in a row after a season-opening loss at Detroit. The right-hander was charged with two runs on two hits and a walk, striking out one.

Kelencic and J.P. Crawford, who had a double and a single, had two hits apiece for the Mariners, who hadn’t won since opening the season with two victories at Minnesota.

Tim Anderson raised his average to .471 with a pair of singles for the White Sox, whose four hits were all singles.