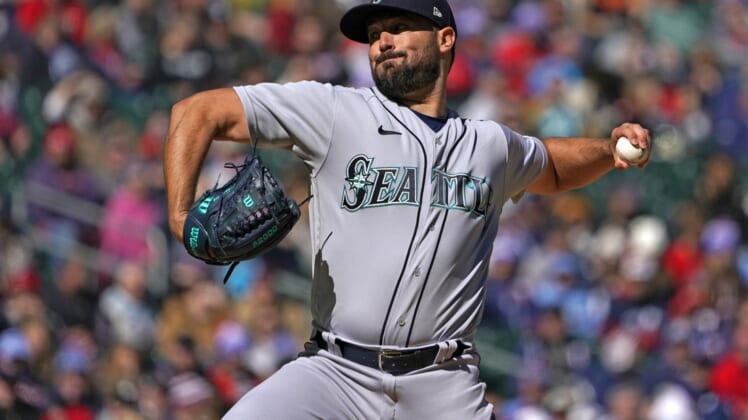 Robbie Ray pitched seven strong innings in his Seattle debut as the Mariners defeated the host Minnesota Twins 2-1 in the Major League Baseball season opener for both teams Friday afternoon.

Mitch Haniger hit a two-run home rim for the Mariners after the scheduled opener in Minneapolis was delayed a day because of inclement weather in the Twin Cities.

Gio Urshela hit a solo shot in his debut for the Twins.

Ray, a left-hander who won the American League’s Cy Young Award last season with Toronto before signing as a free agent with the Mariners in the offseason, allowed one run on three hits, with four walks and five strikeouts. He threw 96 pitches.

Paul Sewald worked a 1-2-3 eighth for the Mariners and fellow right-hander Drew Steckenrider pitched the ninth for the save.

Steckenrider allowed a leadoff single to Luis Arraez, but then got Miguel Sano to foul out to the catcher, fanned Alex Kirilloff and got Gary Sanchez to fly out to deep left field to end it, with Jesse Winker making the catch with his back up against the wall.

The only run off Ray came on Urshela’s blast to left-center field with one out in the bottom of the fourth to make it 2-1.

Seattle’s Ty France, who set a franchise record by getting hit 27 times by pitches last season, was plunked on the left elbow by Twins starter Joe Ryan in the first inning.

Haniger followed with a two-run shot to left-center field on an 0-1 pitch to give the Mariners an early lead.

Ryan, a right-hander who was making just his sixth major league appearance, went four innings for the Twins, giving up two runs on two hits. He walked four and struck out four.

Shortstop Carlos Correa, the Twins’ big offseason acquisition as a free-agent signing from Houston, went 1-for-4 and left four runners on base.

Winker, acquired by the Mariners in an offseason trade with Cincinnati, went 2-for-4.