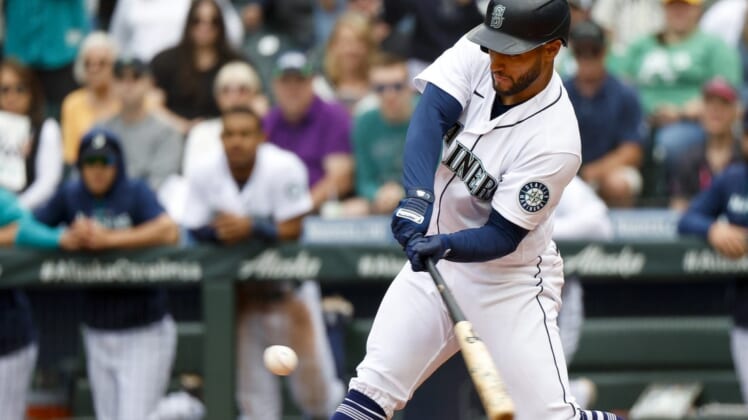 Abraham Toro singled home the winning run with the bases loaded in the ninth inning as the Seattle Mariners defeated the visiting Oakland Athletics 2-1 Saturday afternoon.

Pinch-hitter Justin Upton tied the score at 1-1 on a home run with one out in the eighth off A’s reliever A.J. Puk.

Diego Castillo (6-1) pitched a scoreless eighth to earn the victory.

The Mariners’ Eugenio Suarez drew a leadoff walk against Lou Trivino (1-6) to start the winning rally. Carlos Santana grounded a single into right field, sending pinch-runner Marcus Wilson to third. Cal Raleigh reached on a fielding error to load the bases before Toro hit a liner to right-center to end the game.

Both starters were excellent.

Oakland’s Paul Blackburn pitched 6 1/3 scoreless innings and allowed four hits, walked one and struck out five. Mariners rookie George Kirby, a fellow right-hander, went seven innings and gave up one run on three hits. He walked one and tied a career high with nine strikeouts.

The A’s scored in the top of the first inning. Tony Kemp drew a leadoff walk on a 3-2 pitch and advanced to third on Ramon Laureano’s single to right. An out later, Sean Murphy lifted a sacrifice fly to right.

The Mariners had chances against Blackburn in the first two innings but failed to capitalize.

Julio Rodriguez, who earlier in the day was named the American League’s Rookie of the Month for the second consecutive time, led off the bottom of the first with a single up the middle. Rodriguez stole second and advanced to third on catcher Stephen Vogt’s errant throw. Jesse Winker hit an infield fly and Suarez lined out to shortstop Tony Allen to start an inning-ending double play, catching Rodriguez well off third base.

Seattle threatened again in the second, loading the bases with two outs. Blackburn got Sam Haggerty to ground out to second baseman Kemp to end the inning.

Blackburn cruised from there, retiring 14 consecutive batters until Raleigh’s one-out double in the seventh chased him.

A’s manager Mark Kotsay was ejected by home plate umpire Chris Segal in the top of the sixth inning for arguing balls and strikes.