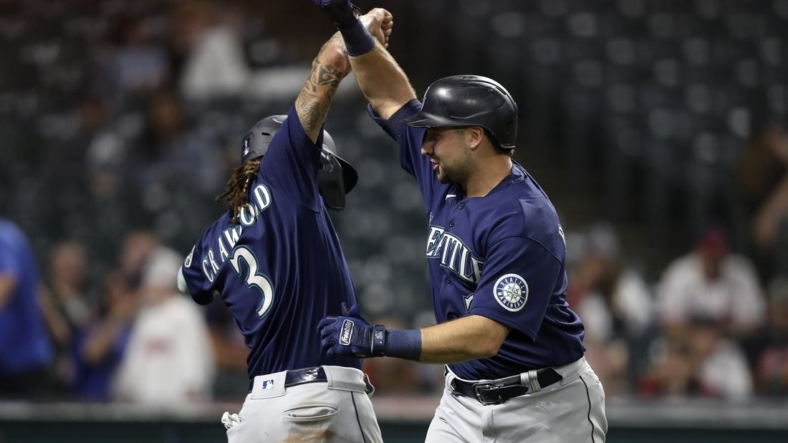 But they likely didn’t mind much ahead of a Labor Day matchup against the visiting Chicago White Sox.

The Mariners sat through a 4 1/2-hour rain delay Sunday but defeated the Cleveland Guardians 6-3 in 11 innings, capping a 6-0 trip that included three games in Detroit.

J.P. Crawford drove in the go-ahead run in the 11th Sunday, and Cal Raleigh added a two-run shot for insurance. Rookie Julio Rodriguez went 4-for-6 with a solo homer.

“What a long day,” said Mariners manager Scott Servais, whose team has won seven straight and currently owns the American League’s top wild-card playoff berth. “You sit here for about a four-hour delay. You don’t know what’s going to happen, how guys are going to respond.”

The Mariners sent Monday’s starter, left-hander Marco Gonzales (10-12, 3.99 ERA), home early, so they’ll at least have one player who got a full night’s rest.

They’ll likely count on Gonzales, who has won his past three starts, to go deep against Chicago. The M’s were forced to use nine relievers Sunday, as they didn’t bring back rookie starter George Kirby after the rain delay, which started in the top of the fourth inning.

The White Sox, minus manager Tony La Russa because of health issues, had a four-game winning streak snapped with a 5-1 loss Sunday against visiting Minnesota.

Despite a .500 record, Chicago remains in the AL Central race, two games behind co-leaders Cleveland and Minnesota.

The loss of La Russa, who took an indefinite leave of absence last week, seems to have galvanized the team.

“Everyone’s playing for the team, playing for each other,” said White Sox starter Lucas Giolito, who took the loss Sunday. “If one guy doesn’t get the job done, the next guy steps up and we have full confidence he’ll get the job done. So, just having that mentality coming together as a team. If we keep that up, we’ll put ourselves in a good position.”

Monday’s game will open a seven-game trip for the White Sox, a stretch that includes a stop in Oakland.

“We play the way we played (last) week, watch out,” White Sox acting manager Miguel Cairo said. “We’re going to have a pretty good chance, and the guys are excited about going out (West).”

Chicago right-hander Lance Lynn (4-5, 4.70) is scheduled to start the opener of the three-game series in Seattle.

Lynn allowed one run on four hits in seven innings and struck out eight in a 4-2 victory against Kansas City on Wednesday in his most recent outing.

“Obviously, everybody is a little down when you lose your manager,” Lynn said. “You hope that everything is good and everything checks out good. He has some stuff he has to take care of, and we have to do our part to stay in this race.”