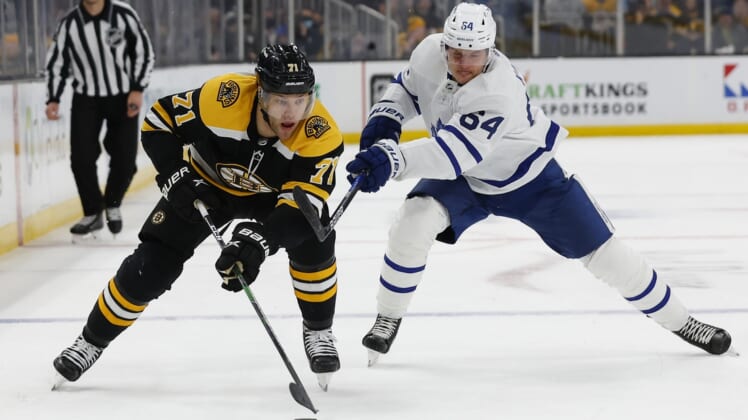 The visiting Toronto Maple Leafs scored three goals in each of the first two periods on the way to a 6-4 win over the Boston Bruins on Tuesday night.

John Tavares added two assists, including the primary set-up on Matthews’ 49th goal of the season with four minutes left in the second period.

Rookie Erik Kallgren made 23 saves in the Toronto net after replacing Petr Mrazek at 7:44 of the first period. Mrazek, who made three saves on four shots, left with a groin injury.

Toronto scored first, at the 5:09 mark, as Blackwell redirected Jason Spezza’s feed off a net-front turnover.

Just 50 seconds later, the hosts answered when Pastrnak’s one-timer from the left circle deflected in off a defender.

Rielly flipped the score back in Toronto’s favor at 9:43, burying a loose puck following William Nylander’s short pass from beyond the goal line.

With 1:16 left in the first, Kerfoot sped ahead after blocking Bruins defenseman Connor Clifton’s shot and slid a breakaway goal inside Swayman’s right post to give the Leafs a two-goal lead.

In the second period, Matthews fed Marner for a one-timer at 8:28 before scoring on a power-play rebound at the 16-minute mark. Kampf redirected Rielly’s point shot to make it 6-1, 47 seconds after Matthews scored.