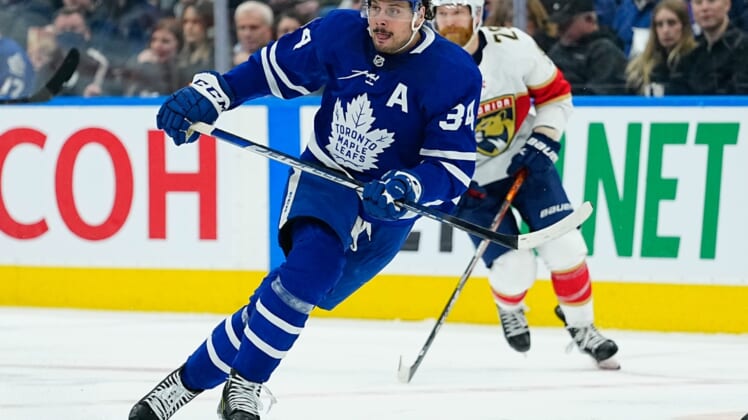 With the franchise record for goals in a season within sight for Auston Matthews, the Toronto Maple Leafs open a four-game road trip Saturday night against the Philadelphia Flyers.

Matthews became the fourth player in team history to reach 50 goals in a season when he scored into an empty net late in the third period Thursday in a 7-3 home victory over the Winnipeg Jets.

“It was fun,” Maple Leafs coach Sheldon Keefe said. “The fans enjoyed it. It made for a great atmosphere there in the third period. They were encouraging him and pushing Auston and I thought it was great. Good to see the fans have that moment and Auston to have that accomplishment here on home ice, it was great.”

Said Matthews: “I just keep playing and keep shooting. Obviously, I had some good looks but not sure if I ever envisioned it being an empty-net goal, but I’ll take it. A goal’s a goal.”

“It was pretty unreal,” Nylander said of Matthews’ feat. “It actually reminded me of when I was younger and my dad (Michael Nylander) was playing in Washington and (Alex) Ovechkin scored 50 one night when I was there. … It brought back some memories and it’s just incredible and well deserved.”

Keefe said that goaltender Jack Campbell (rib) will play on Saturday. Campbell has not played since March 8.

His return comes at a good time for the Maple Leafs (43-19-5, 91 points) with goalie Petr Mrazek (groin) out for a few weeks. Rookie Erik Kallgren played in three of the last four games.

Defenseman Jake Muzzin (concussion) will join the team for the trip, but will not play Saturday.

Ondrej Kase, who had a head injury March 19 against the Nashville Predators, was placed on long-term injured reserve.

The Flyers (21-35-11, 53 points) officially were eliminated from playoff contention after a 4-1 loss to the host Minnesota Wild on Tuesday.

Philadelphia had a 17-8 advantage in shots on goal in the third period, leaving interim coach Mike Yeo encouraged.

“It’s easy right now to just get down and get negative,” Yeo said. “We’ve got to find a way to keep pushing. And that’s why I give the guys credit in the third period.”

Noah Cates made his NHL debut with the Flyers against the Wild on Thursday, playing on a line with Morgan Frost and Owen Tippett.

“I think I needed to get that first shift out of the way,” Cates said. “Kind of just get that under my belt, and I thought I was better from there. The nerves kind of went away after that and got playing and got in the flow.”

Tippett was acquired from the Florida Panthers in a March 19 trade for Claude Giroux.

Tippett has played well in six games with the Flyers. Against the Wild, Tippett had a third-period breakaway. Although he did not score, he drew a penalty and created a power play.

“I was very pleased,” Yeo said. “He’s creating offensive opportunities. He has a heavy shot. It’s a matter of time until some start going in. There are still some things he’s working on with the 200-foot game.”