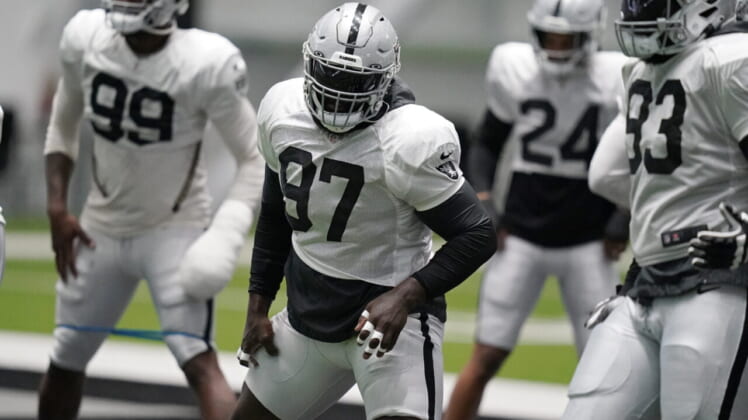 In following coach Rod Marinelli to Las Vegas, Maliek Collins not only makes the Raiders stronger up front, but he’s also a veteran ear for younger players

So far one of the big storylines during the Las Vegas Raiders training camp has been the addition and play of free-agent defensive tackle Maliek Collins.

“I think I said it the last time we had a press thing here, he’s the key to our defense,” Gruden said. “He’s got a chance to be one of the better ones.”

That high praise came from Gruden last week when talking about his new, stout defensive tackle. At only 27 years old, Collins has yet to achieve his true peak according to his line coach both in Dallas and Las Vegas.

“I think he’s had a good, solid career in Dallas, but I think the climb is still ahead of him,” Raiders defensive line coach Rod Marinelli said. “I think he’s got to keep working to get better and top it off. I think that’s one of the things Coach Gruden saw, really. Coach Gruden did a great job of the evaluation of Maliek and stayed on it and stayed on it, and I had the relationship with him, obviously, but that was Coach Gruden selling it, doing it all. That one was all him.”

Despite his ability to disrupt in the middle on defense for the Raiders, Collins’ natural leadership ability also means he’s a magnet for younger players looking for advice or feedback. Collins acknowledge they were seeking him out but just says its part of who he is. It’s not something he forces or was asked to do.

““I mean, when I talked with [Head Coach Jon] Gruden when I was first planning on coming here, he told me just come in and be myself,” Maliek Collins said on Thursday. “So, that’s what I’ve been trying to do to the best of my ability, is do things that I normally do. I’m not a big speech guy. I’m not a big hoorah guy. I kind of just lead by example and just do things the right way.”

On a defensive team with lots of youth, Maliek Collins’ “lead by example” is a key component to the Raiders reaching the goals they’ve set. The leadership qualities Collins brings to the Raiders is something Paul Guenther recognizes. But what is it about Collins that makes him so valuable for the upcoming season?

“Because he knows what he’s talking about and the players respect that,” Guenther said. “And I always tell the players, ‘knowledge is power,’ whether in football, business, whatever. If you know what you are talking about people are going to gravitate to you, and that’s what he possesses.”

The young and talented Raiders defense needs some of that veteran experience and leadership. It’s persona and the scheme employed by Guenther require a unique athlete both adept physically, but also between the ears.

“When players hear that and hear him talk, they are like, ‘Wow, this guy is really detailed and understands what’s going on,’” Guenther said of Maliek Collins. “So, they want to pick his brain and he’s willing to give it back to them, so that’s the kind of guy you want on your team.”

And while leadership is an important role for Collins, his play on the field also continues to turn heads. As a true 3-technique defensive tackle, Collins is a valuable addition upfront. What does it take to be a good 3-technique in the NFL?

“Three-technique, you got to be the dog,” Maliek Collins said. “You got to be the key. He has to establish things with his get-off. I mean, Keith Millard, that was the first one that I was introduced to from Marinelli. And then John Randle, of course, Warren Sapp. After that Marinelli went to Chicago, so he had Tommie Harris and Henry Melton and then Dallas with Tyrone [Crawford] and then I came in. Not to say that I’m on their level yet or anything like that, but those are the people that I strive to be like or be more like.”

Both Gruden and Guenther have identified Maliek Collins as the key to their defense in 2020. If that’s true, the quiet but strong and engaging leader is ready to play his part.

“I vibe really good with the d-line,” Maliek Collins said “Big Hank [Jonathan Hankins], [Arden] Key, Maxx [Crosby], ‘Cle’ [Clelin Ferrell], Carl [Nassib]. Everybody’s cool. Mo Hurst. So, I mean we just all working together. We’re all honest with each other every day about the work we put in and not scared to call each other out. Just going to be demanding of each other too. It just can’t be coming from a coach.”

It’s easy to see why early Collins has garnered kudos and the respect of his coaches and teammates.