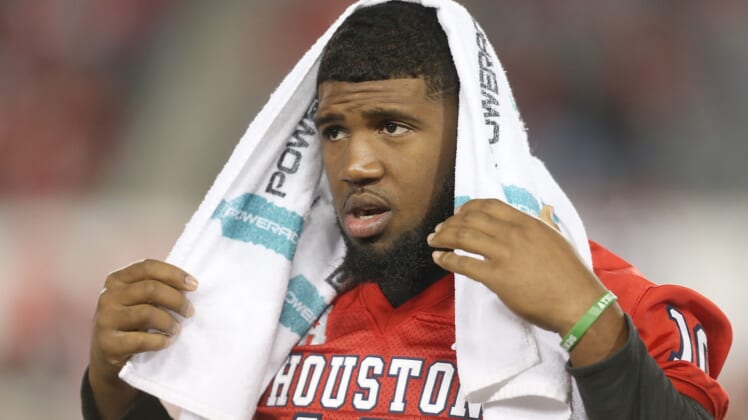 Houston defensive tackle Ed Oliver was ruled out of the second half of Friday’s game against Memphis for undisclosed reasons.

After the game, Houston head coach Major Applewhite revealed the reason why, as Oliver suffered a setback to his knee injury and is expected to need a few weeks to recover.

Major Applewhite says DT Ed Oliver suffered a setback trying to come back from knee injury against SMU and set timetable back 2-3 weeks.

Additionally, Applewhite tried to squash any notion that Oliver had played his final game with the Cougars, which was widely speculated during Friday’s second half.

Asked Major if he thought this was Ed Oliver’s last game: ‘I don’t think so. That’s not the impression I’ve ever gotten from him.’

Oliver was caught by cameras going through something and appeared to be extremely emotional at one point late in the second half.

Weird situation unfolding in Memphis … Houston DT/prospective Top 10 pick Ed Oliver came back today. Played first half. Hasn’t played at all in the second half — broadcast team says they weren’t given a reason. Cameras just caught him getting emotional on the sideline. pic.twitter.com/FqaZXy6qbG

A lot of the speculation about Oliver’s tenure at Houston has revolved around the spat he and Applewhite had on the sideline last week over a jacket.