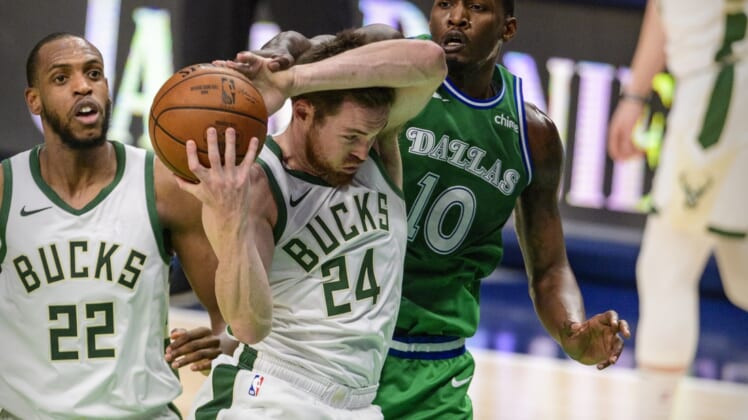 Kristaps Porzingis added 26 points and 17 rebounds as the Mavericks won for the sixth time in the past seven games.

The Bucks played without two-time reigning MVP Giannis Antetokounmpo (knee) for the third straight game and the fifth time in the past 10 contests. Milwaukee has lost two straight games and five of the past eight.

Donte DiVincenzo made a career best six 3-pointers and scored 22 points while Bobby Portis recorded 20 points and a season-high 14 rebounds for the Bucks. Brook Lopez added 16 points, and Khris Middleton had 14 points and eight rebounds despite shooting just 6 of 27 from the field.

Jrue Holiday contributed 13 points for the Bucks, who shot just 38 percent from the field and was 12 of 33 (36.4 percent) from behind the arc.

Jason Richardson scored 14 points and Tim Hardaway Jr. and Maxi Kleber added 12 apiece for the Mavericks, who made 44.3 percent of their shots, including 17 of 45 (37.8 percent) from 3-point range.

Porzingis scored 11 points in the fourth quarter. He drained back-to-back 3-pointers to give Dallas a 95-93 edge with 6:43 remaining.

Porzingis buried another 3-pointer to give the Mavericks a 103-95 advantage with 4:28 left.

The Mavericks were ahead 110-97 after Dorian Finney-Smith knocked down a 3-pointer with 2:17 to play, and Dallas closed out a strong fourth quarter in which it outscored the Bucks 36-17.

Lopez scored 13 first-half points and the Bucks took a 56-55 lead into the break. Doncic and Porzingis scored 13 apiece for Dallas prior to halftime.

Doncic drained a 3-pointer to give the Mavericks a 68-62 lead with 6:35 left in the third quarter.

Dallas held an 80-72 edge after Hardaway’s 3-pointer with 1:58 remaining before Milwaukee rattled off the final 12 points of the quarter as part of a 14-0 run.

DiVincenzo capped the third-quarter spurt with his fifth 3-pointer of the game with 5.2 seconds left and then knocked down two free throws 10 seconds into the fourth quarter to give the Bucks an 86-80 lead.