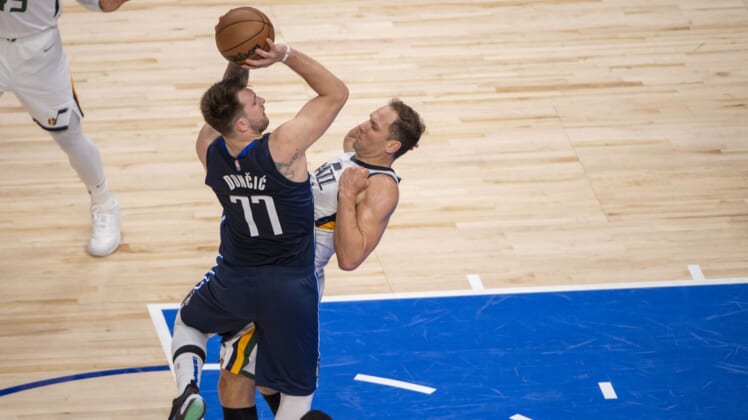 Luka Doncic scored 33 and grabbed 13 rebounds to ignite the host Dallas Mavericks to a 3-2 Western Conference first-round playoff series lead with a dominant 102-77 win over the Utah Jazz on Monday night.

The Mavericks, who never trailed and led by as many as 33, have a chance to close out the series in Salt Lake City in Game 6 on Thursday.

Jalen Brunson added 24 points for the Mavericks. Dorian Finney-Smith was the only other Dallas player in double figures with 13 points, but that was more than enough offense against Utah on this night.

The Mavericks held the Jazz to just 55 points through the first three quarters, blowing the game wide open in the third thanks to Doncic’s 19-point third period.

Jordan Clarkson scored 20 points and Rudy Gobert compiled 17 points with 11 rebounds, but the Jazz looked nothing like the energetic squad that tied the series up at two apiece at home Saturday.

Donovan Mitchell only scored nine points on 4-of-15 shooting, 17 below his regular-season average. He left the game in the fourth quarter due to an apparent left hamstring injury.

Mike Conley, who has struggled all series, had just four points for Utah. Even Bojan Bogdanovic, the Jazz’s most consistent offensive player this series, missed all five of his 3-point attempts and was 0-for-9 from the field. He managed just two points.

Dallas limited Utah to an almost-unbelievable 3-for-30 from 3-point range and 37.7 percent shooting overall.

Danuel House Jr. and Juancho Hernangomez hit back-to-back 3-pointers for the Jazz, bringing the visitors to within 30-28 early in the second quarter, but it was all Dallas after that.

The Mavericks scored seven straight, and then after a couple of Clarkson baskets, held Utah scoreless for nearly six minutes. The score went from 40-32 at the 6:19 mark to 52-32 during the Jazz’s drought.

Dallas led 52-36 at the break, shutting down the Jazz, who averaged 113.6 points a game during the regular season. Clarkson was the only Jazz player to score in the final nine minutes of the half.

Doncic then did his thing in the third quarter, hitting 6 of 9 from the field as the lead grew.