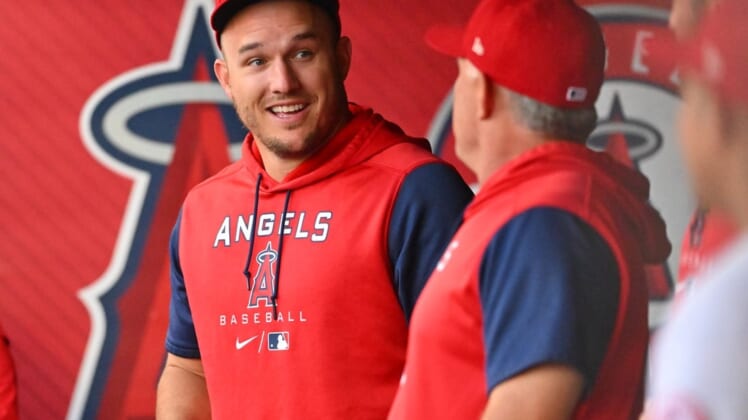 The status of Angels center fielder Mike Trout is uncertain for Los Angeles’ series opener against the New York Mets on Friday in Anaheim, Calif., but the Angels were breathing a sigh of relief for another reason Thursday night.

They finally ended their franchise-record, 14-game losing streak, beating the visiting Boston Red Sox 5-2 to salvage the finale of a four-game series. The Angels won for the first time since beating the Texas Rangers 5-3 on May 24.

Trout, a three-time American League MVP, has been out since straining his groin on Tuesday. He is listed as day-to-day, but that doesn’t ease the minds of those who follow the Angels closely.

When Trout strained his right calf on May 17, 2021, the Angels announced he would miss six to eight weeks. Instead, Trout missed the rest of the season.

“We like the way the progression is going,” said Nevin, who got his first win in charge after two defeats. “Just to be safe, (Thursday) is another (day off).”

The Angels promoted outfielder Dillon Thomas from Triple-A Salt Lake to provide some outfield depth, and he started in left field on Thursday,.

The Angels not only are shuffling their outfield heading into the Mets series, but they also are moving things around in their rotation.

Michael Lorenzen and Patrick Sandoval, initially scheduled to start Friday and Saturday, respectively, were pushed back a day. Noah Syndergaard, scheduled for Sunday’s nationally televised game against his former team, instead was pushed back to Tuesday against the Los Angeles Dodgers.

That left Friday’s game open, and the club is expected to call up left-hander Jhonathan Diaz from Salt Lake to make the start.

Diaz (1-0, 1.32 ERA) started two games for the Angels earlier this season and did not allow a run in either contest. He threw five scoreless innings against the Washington Nationals on May 6 and earned a victory. On May 14 against the Oakland A’s, he threw 4 2/3 scoreless innings.

He also pitched in relief against the Yankees on June 2, giving up two runs in four innings. Diaz has not opposed the Mets in his two-year major league career.

The Mets, coming off losing two of three to the host San Diego Padres, will get a boost on Friday with the return of Tylor Megill from the injured list. The right-hander has been out since May 12 due to right biceps inflammation.

Megill (4-2, 4.41 ERA) made a rehab start for Double-A Binghamton on Sunday, allowing two runs and striking out five in 3 2/3 innings.

“Everything felt good,” Megill said, according to the New York Post.

Even with Megill back, the Mets’ rotation will still be missing Jacob deGrom (shoulder) and Max Scherzer (oblique).

“(The return of Megill is) important for everybody, but especially Tylor, (who) was pitching real well for us for the most part when he went down,” New York manager Buck Showalter said. “So was Max. And we all know what Jake’s capable of.

“That’s the way baseball works. When you play this long, you plug one hole — I don’t want to call it a hole because we got some pieces that are very capable. You get one thing back and something else goes away.”

Megill will be opposing the Angels for the first time in his career.