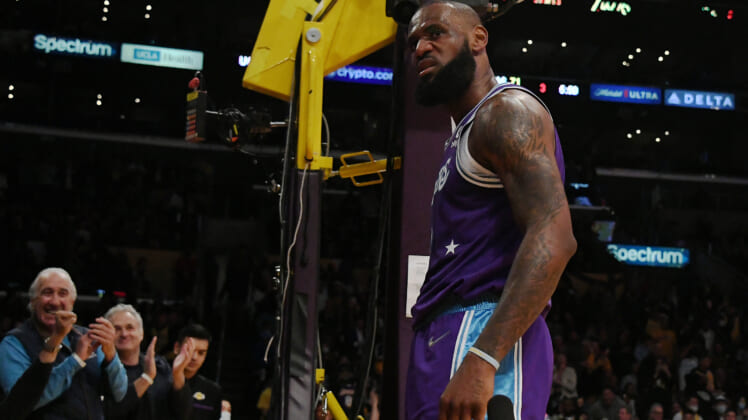 Los Angeles Lakers superstar Lebron James truly believes Kyrie Irving could be key in bringing another championship to LA in 2023, and he couldn’t care less about giving up future first-round picks in an attempt to land him in a deal.

As much as any current NBA player, James knows how to win at the highest levels of the sport. And there is no better proof of that fact than his teams reaching 10 NBA finals during his 19 years in the league. He rarely has endured losing seasons and the teams he is on are always in the running for division titles and high seeds in the NBA playoffs.

Part of that success has often come at the expense of those organizations’ long-term health. James has had a reputation for years of having a major influence on the organizations he plays for and his desire to do whatever it takes to surround himself with the pieces necessary to compete for another championship.

After a very disappointing finish in 2021-2022, where the Lakers finished below .500 and didn’t even reach the NBA play-in tournament, James is sure to want an immediate turnaround next season. One way that could happen is through a trade for disgruntled and difficult Brooklyn Nets star Kyrie Irving. It is a move James is reportedly very supportive of after winning a title for the Cleveland Cavaliers in 2016 with Irving as his wingman.

However, talks between the Lakers and Nets have reportedly stalled. The most likely reason is that Brooklyn wants more assets from LA if they have to take on a lesser talent, and more expensive contract, in Russell Westbrook.

Well, ESPN NBA insider Brian Windhorst claimed on Friday that James is just fine giving up first-round draft assets in a move for Irving, even if the Lakers front office is unsure about such a decision.

The Lakers do not have a first-round pick until 2025 after selling off picks for this year and in the next two seasons in previous trades.