There seems to be a building divide in Los Angeles Lakers land between who Lebron James wants the team to add this offseason, and what those in the front office would prefer to do.

There is a lot of pressure on many of the key influencers in the Lakers organization. The team was a massive disappointment in 2021-2022 as they finished under .500 for the seventh time in the last nine years and they were unable to reach the NBA play-in tournament in May. The heat being felt reaches as high as team president Jeanie Buss, and down to the team’s player face in Lebron James.

All involved know the team needs to make some changes to right the ship and return to title contention next season. However, there seem to be differing opinions on how they should do that. During a Friday edition of “The Athletic NBA Show“ podcast, Lakers beat writer Jovan Buha went into depth about the front office’s preferred offseason targets. And they are not the same as James’ desire to see his former teammate and current Brooklyn Nets star Kyrie Irving end up in Los Angeles.

“If you have Lebron James and Anthony Davis, you need to maximize your window for next season,” Buha explained. “In addition, I know they’ve looked around. Indiana, can we get a Myles Turner and a Buddy Hield. The Buddy Hield deal has been a thing forever. Is that something where Myles Turner can be that stretch five [they need]? Buddy Hield gets you more shooting on the perimeter. But I think we’re not gonna see anything happen until [Kevin Durant] gets moved.

“But with Kyrie, I know he wants to be in LA and Lebron wants him in LA. He’s been behind the scenes putting some pressure,” he continued. “I don’t want to get too into it, but I think the Jeannie Buss tweet had something to do with some of the stuff that’s been going on behind the scenes. I think there’s a slight divide right now where Lebron wants Kyrie and some people internally might prefer a Myles Turner, Buddy Hield type deal.” 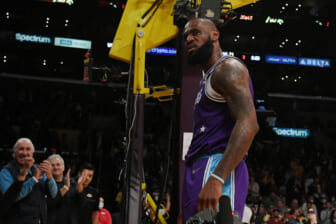 Irving and the Lakers have been linked ever since Durant requested a trade from Brooklyn in June. However, trade discussions have recently stalled, and Buha added in his report that the Nets want a first-round pick in return if they have to take on Russell Westbrook’s massive contract in a deal. Something the Lakers are not prepared to offer at this time.