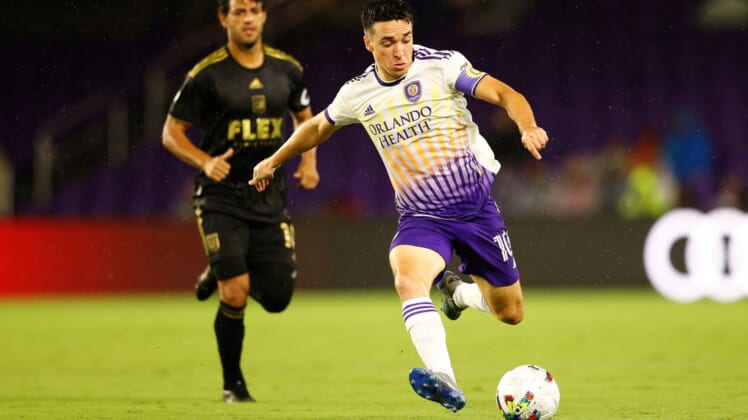 Orlando City SC kept top scoring threat Carlos Vela from a goal Saturday night at home. It was the rest of the team the home side couldn’t contain in Los Angeles FC’s 4-2 win at Orlando, Fla.

Brian Rodriguez and Jesus Murillo scored first-half goals, then Ilie Sanchez and Kwadwo Opoku tallied in the second half as LAFC won their second road match of the season and second in the state of Florida.

Orlando’s defense was exposed by the LAFC attack, with the visiting team improving to 4-0-1 and 13 points with the win. LAFC didn’t play last weekend but didn’t show any rust on Saturday.

LAFC got off to a flying start in the rain in central Florida, looking strong on the attack early. When defender Antonio Carlos was lost to Orlando with a leg injury in the 18th minute, the home side was on its heels.

Vela’s long ball to Cristian Arango was re-directed back to Rodriguez, who made it 1-0 in the 24th minute.

Orlando City (2-2-2, 8 points) lost a goal on an offside call, one for Alexandre Pato, but he got his goal when his shot from the top of the box eluded LAFC goalie Maxime Crepeau in the 36th minute.

LAFC scored quickly after that. Orlando’s Ruan headed the ball toward the middle in trying to clear it from his team’s goal area, and Murillo pounced on the mistake for an easy score and a 2-1 LAFC lead in the 38th minute.

However, Orlando City tied it at 2 with Joao Moutinho’s goal just before halftime, and the match was set up for a potential second-half shootout.

But LAFC was the only team to score.

In the 51st minute, Sanchez got to a loose ball and scored from long range. Orlando goalkeeper Pedro Gallese was screened off and unable to pick up the ball.

It was a tough night for the Peruvian goalie who’d just come off World Cup qualifying games.

Opoku slammed in a stoppage-time insurance goal on the counterattack in the third minute of second half stoppage time.